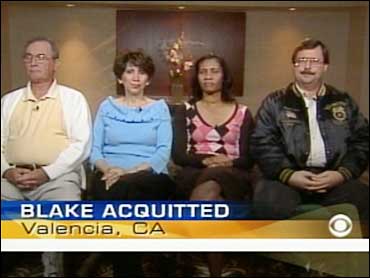 The facts (or lack thereof) made them do it -- acquit Robert Blake of murdering his wife, that is.

Four jurors tell The Early Show co-anchor Harry Smith the prosecutor's case was flat-out too flimsy to convict the star. His lawyer agrees.

The panelists added that the testimony of the prosecution's star witnesses, two stuntmen, didn't ring true.

The verdict was handed up Wednesday afternoon after more than eight days of deliberations, following a four-month trial.

Jurors found Blake not guilty of one count of murder and one charge of trying to get someone to slay Bonny Lee Bakley. They deadlocked 11-1 on a second solicitation charge, which then was dismissed by the judge.

Blake was charged with shooting Bakley, 44, in their car outside the actor's favorite Italian restaurant on May 4, 2001, less than six months after their marriage. Blake did not testify during the trial.

The defense called it a weak case built largely on the testimony of two Hollywood stuntmen, both of whom were once heavy drug users, who said Blake tried to get them to kill Bakley. Blake's lawyers portrayed the stuntmen as drug users prone to hallucinations and delusions.

Jury foreman Thomas Nicholson told Smith Thursday that, "The circumstantial evidence was, in my mind, rather flimsy. I never felt comfortable at any time about the evidence in its total. It kind of had a lot of holes in it. There were lots of links missing out of the chain."

Fellow panelist Lori Moore concurred, saying she actually thought Blake was guilty but the evidence "didn't point to his guilt. …We didn't have enough evidence to show that he was guilty."

Juror Cecilia Maldonado says there were "too many inconsistencies" in their stories. "And I did not feel that they were believable."

After the acquittal was announced, a visibly emotional Blake embraced attorney Gerald Schwartzbach, and openly wept in court.

Schwartzbach sounded much like the jurors in speaking to Smith Thursday: "Although I was convinced of Robert's innocence, it was very important…that the jury understood that he was presumed innocent, and the prosecution had the burden of proving him guilty beyond a reasonable doubt. And that they didn't shift that burden."

Asked about the wrongful death suit Blake still faces from Bakley's family, Schwartzbach said with a slight smile, "One step at a time."

"The fact of the matter is," he added, "there was no evidence, absolutely no evidence that Robert committed this crime. And as I said to the jury, the prosecution built its case on the backs of two men, with serious drug problems, who had made many, many inconsistent statements."