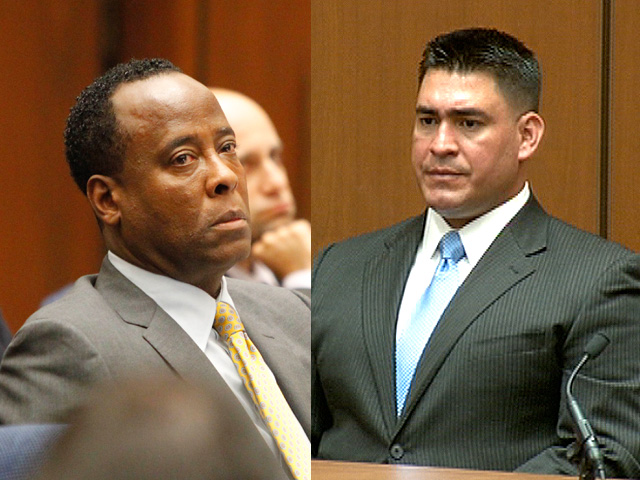 (CBS/AP) LOS ANGELES - The first bodyguard to reach Michael Jackson's bedroom after the singer's doctor called for help told jurors Thursday that he was told by Dr. Conrad Murray to hide medicine vials before calling 911.

Alberto Alvarez said in testimony Thursday that Dr. Conrad Murray grabbed the vials form a nightstand next to Jackson, who was still in his bed.

He testified that Murray only told him Jackson had a bad reaction.

When he entered the bedroom, Alvarez said he saw Jackson's eyes were open and was surprised to see that the singer was wearing a condom catheter.

Alvarez testified he stowed the vials before calling 911. He is the sixth witness to testify in Murray's involuntary manslaughter trial, which is in its third day.

Alvarez also testified Thursday that Michael Jackson was in good spirits at a rehearsal on the night before he died.

"He was very happy," Alberto Alvarez testified. "I do recall he was in very good spirits."

Murray has pleaded not guilty to involuntary manslaughter in connection with Jackson's death.

Prosecutors have been calling witnesses who were with Jackson and Murray the day the singer died.

Authorities accuse Murray of giving Jackson a lethal dose of the anesthetic propofol in the bedroom.

Prosecutors are calling key witnesses in an attempt to show jurors that Murray delayed calling authorities on the day the King of Pop was found lifeless and was intent on concealing indications that he had been giving the singer doses of the surgical anesthetic.

The jury has already gotten a glimpse into the entertainer's inner sanctum through photos and testimony.

In testimony during a preliminary hearing earlier this year, Alvarez said Murray ordered him to stash away vials of medicine and an IV bag before calling 911. Jackson, his eyes and mouth open, appeared to be dead, he said.

Alvarez's testimony will likely be challenged by Murray's defense attorneys, who on Wednesday questioned Jackson's head of security and the singer's personal assistant about why they didn't reveal certain details about the day Jackson died to police for at least two months.

Defense lawyer Ed Chernoff asked Faheem Muhammad and Michael Amir Williams about whether they conferred with Alvarez before their interviews with detectives.

Williams, who was Jackson's personal assistant, said his interview with detectives had been delayed. He testified Wednesday that he received an urgent phone call from Murray on the day of Jackson's death but wasn't told to call 911.

He called Muhammad, who then dispatched Alvarez to Jackson's bedroom on the second floor of the singer's rented mansion in the ritzy Holmby Hills neighborhood of Los Angeles.

The room was off-limits to Jackson's staff, and Muhammad paused before racing up the stairs after reaching the mansion just before paramedics arrived.

"What did you observe about his face," prosecutor David Walgren asked

"That his eyes were open," Muhammad said. "That his mouth was slightly open."

"Paris was on the ground, balled up crying," Muhammad said. He ushered the children out of the room, and then into a sport utility vehicle so they could follow the ambulance to the hospital.

Some of the scenes recounted by Muhammad will likely be repeated Thursday as prosecutors work to fill in other details about Murray's behavior after finding Jackson unconscious. Also expected to testify on Thursday are Kai Chase, a chef who spoke to Murray briefly on the morning of Jackson's death, and paramedics who also tried to revive the singer. The medics believed Jackson was already dead by the time they arrived, but Murray insisted the performer be taken to a hospital for additional resuscitation efforts.

Much of the trial in later sessions will focus on the science of what killed Jackson, and dueling theories of Murray's role.