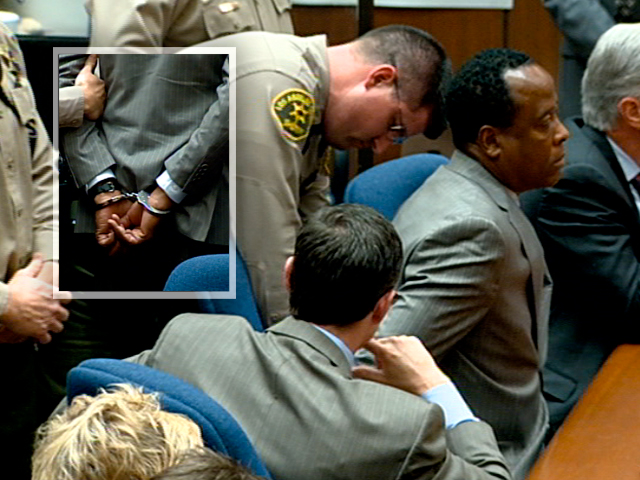 (CBS/KCAL) LOS ANGELES - Hours after being found guilty of involuntary manslaughter in the death of Michael Jackson, Dr. Conrad Murray was placed on suicide watch as he sat in his jail cell Monday night, CBS station KCAL reports.

A jury of seven men and five women deliberated for less than two days before convicting the celebrity doctor in Jackson's 2009 death.

Jurors had 300 pieces of evidence to consider after listening to 49 witnesses and complex medical testimony during the six-week trial.

Prosecutors argued that Murray acted in a criminally negligent manner after giving Jackson a powerful dose of the anesthetic propofol as a sleep aid. The defense, however, maintained that Jackson took a deadly dose of propofol when Murray left his bedroom hours before the singer's death.

According to KCAL, Murray faces up to four years in prison when he's sentenced on Nov. 29, but Judge Michael Pastor ordered him to be remanded immediately.

Pastor, who said Murray "poses a demonstrable risk to the safety of the public," ordered him to be held at the Los Angeles County Jail without bond.

Murray will also lose his medical license as the result of his conviction.