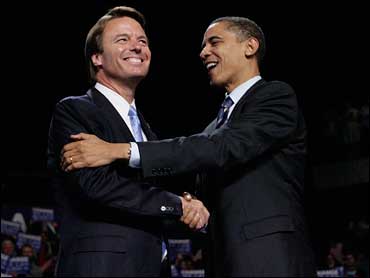 Former Sens. John Edwards and Sam Nunn are on a list of potential running mates for Democratic presidential candidate Barack Obama, a congresswoman said Thursday, one day after she met with members of Obama's team vetting possible candidates.

Rep. Carolyn Cheeks Kilpatrick, a Michigan Democrat who leads the Congressional Black Caucus, said members of her caucus asked her to forward the names of Edwards and Nunn when she met Wednesday with Obama's vice presidential search team. The vetting team, Caroline Kennedy and Eric Holder, indicated the two were on the list.

"We've been brainstorming in the Congressional Black Caucus. Former Sen. Sam Nunn's name has come up, as well as John Edwards' name has come up among our CBC members. I reported that to them and they had both of those names on their list," Kilpatrick said in an interview with The Associated Press.

"I asked them what type of person the senator is looking for? And they said in general someone who could help him rebuild the country ... talking about change. How we reinvest in America, get people back to work and reinforce our education system and bring the jobs back," she said.

She declined to say which names were put forth by Kennedy and Holder during their meeting. The prominent Democratic attorneys have been meeting with lawmakers to receive feedback on Obama's potential running mate.

When Kilpatrick said Gore was her personal choice, "they had a smile on their face. They have a list of candidates. I think I may have been the first to do that. They didn't say one way or the other."

But she wasn't the only one to mention Gore.

"These are all good names," Baca said. "Ultimately the decision will be up to Obama."

Edwards, a former North Carolina senator and John Kerry's running mate in 2004, could help Obama appeal to white, working-class voters who largely favored Hillary Rodham Clinton in the primary and will be a critical voting bloc in the general election. The drawback of an Edwards pick is that he was the vice presidential nominee four years ago, while Obama's campaign is about turning the page.

Edwards has said he is not seeking the vice presidency.

"I'd take anything he asked me to think about seriously, but obviously this is something I've done and it's not a job that I'm seeking," Edwards said last Sunday on ABC's "This Week."

Nunn would bring national security credentials to the ticket, having served as the longtime Armed Services Committee chairman. The former Georgia senator is a member of Obama's foreign policy advisory group.

But Nunn has not been in office for more than a decade so he is not well-known nationally. He is a conservative Democrat who supported school prayer and opposed gays in the military, while Obama tends to have a more liberal viewpoint. Nunn will turn 70 in September.

Other lawmakers who have been briefed say there about 20 names on the list Obama's team has been discussing. The list includes current elected officials, former elected officials and retired military generals, lawmakers have said.

Kilpatrick said most of the names she was asked about were in the Senate.