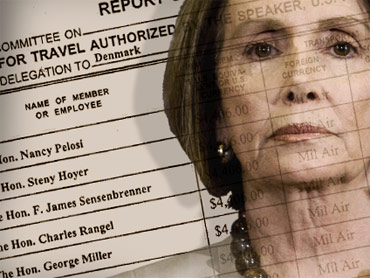 Thanks to recently filed Congressional expense reports there's new light shed on the Copenhagen Climate Summit in Denmark and how much it cost taxpayers.

CBS News Investigative correspondent Sharyl Attkisson reports official filings and our own investigation show at least 106 people from the House and Senate attended - spouses, a doctor, a protocol expert and even a photographer.

For 15 Democratic and 6 Republican Congressmen, food and rooms for two nights cost $4,406 tax dollars each. That's $2,200 a day - more than most Americans spend on their monthly mortgage payment.

CBS News asked members of Congress and staff about whether they're mindful that it's public tax dollars they're spending. Many said they had never even seen the bills or the expense reports.

Rep. Henry Waxman, D-Calif., is a key climate change player. He went to Copenhagen last year. Last week, we asked him about the $2,200-a-day bill for room and food.

But his name is in black and white in the expense reports. The group expense report was filed by House Speaker Nancy Pelosi, D-Calif. She wouldn't talk about it when our producer tried to ask.

Pelosi's office did offer an explanation for the high room charges. Those who stayed just two nights were charged a six-night minimum at the five-star Marriott. One staffer said, they strongly objected to no avail. You may ask how they'll negotiate a climate treaty, if they can't get a better deal on hotel rooms.

Flights weren't cheap, either. Fifty-nine House and Senate staff flew commercial during the Copenhagen rush. They paid government rates -- $5-10,000 each -- totaling $408,064. Add three military jets -- $168,351 just for flight time -- and the bill tops $1.1 million dollars -- not including all the Obama administration officials who attended: well over 60.

In fairness, many attendees told us they did a lot of hard work, and the laid groundwork for a future global treaty.

"It was cold… I was there because I thought it was important for me to be there," Rep. Waxman said. "I didn't look at it as a pleasure trip."

But considering the size of the deficit, and the fact that that no global deal would be reached -- critics question the super-sized U.S. delegation -- more than 165 -- leaving the impression there's dollars to burn. In this case, more than a million.