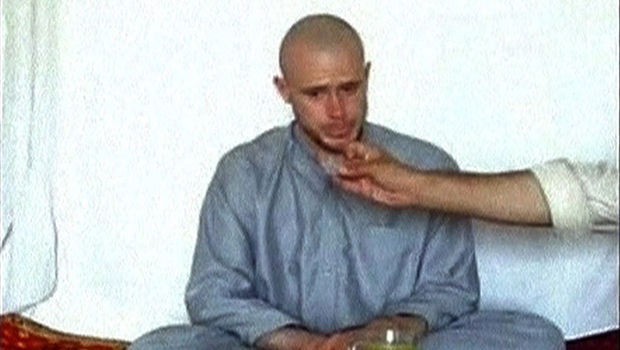 Defense Secretary Chuck Hagel will be front and center at the first public hearing on the Bowe Bergdahl prisoner swap when he goes before the House Armed Services Committee Wednesday morning.

Despite several closed-door briefings from the Obama administration on what went down, lawmakers from both parties are still not satisfied with what they've learned and they're still searching for details on the exchange - especially why they weren't given a heads-up on the deal before it went down 10 days ago.

The administration has pointed to several reasons they rushed to carry out the swap without telling members of Congress ahead of time, including a decline in Bergdahl's health and the threat that he would have been killed by the Taliban if the news had become public.

House Armed Services Committee chairman Buck McKeon, R-Calif., complained that the White House's claims that telling Congress about the "transfer would have put military operations at risk are absurd."

None of the administration's justifications have satisfied lawmakers: some have said that a proof-of-life video they were shown didn't evoke the same sense of urgency that the White House expressed. Others have noted the administration has shared details of sensitive military operations in the past, including the one to kill al Qaeda leader Osama bin Laden.

"This is now the third explanation the White House has offered as to why they violated the law," McKeon continued. "First, they were concerned about Sgt. Bergdahl's medical condition, then it was a Taliban threat to kill him, and now it is because they couldn't comply with the law without putting military operations at risk."

A Republican aide to the Armed Services Committee told CBS News that members will press Hagel and Defense Department general counsel Stephen Preston on the exact timeline of when the administration reached an agreement with Qatar - the gulf nation that helped broker the deal and is tasked with watching the Taliban leaders swapped for Bergdahl for the next year - and when Bergdahl was exchanged.

"Walk us through all of this and justify breaking the law," the aide said.

McKeon also sent a letter to Hagel on Monday asking that the Pentagon begin handing over any documents related the to transfer or release of the detainees since 2012, including documents relating to congressional notification. He also requested documents related to Qatar's "capacity, willingness, and past practices regarding security assurances associated with the transfer or release of any Guantanamo detainees," and intelligence reports and assessments relating to Bergdahl dating back to 2009, according to a copy of the letter provided to CBS News.

Democrats are also expected to focus on the conditions under which the administration violated the requirement to give Congress 30-days notice before releasing detainees from Guantanamo Bay, where the 5 Taliban swapped for Bergdahl were held. The top Democrat on the House Armed Services Committee, Adam Smith, D-Wash., has said he supports the deal to get Bergdahl back but would have preferred to see consultation with Congress take place sooner.

Sen. Dick Durbin, D-Ill., said Tuesday that the prisoner swap was finalized just one day before it took place on June 1, and that American officials weren't informed of the pickup location for Bergdahl until an hour ahead of time. But Senate Armed Services Committee members said the Pentagon officials who briefed them Tuesday morning "were not clear" on that timeline and did not justify the swap publicly or privately.

The House Armed Services Committee aide also told CBS News that Republicans will focus on the bigger policy implications of the fact that the exchange took place just days after President Obama traveled to Afghanistan and reiterated his pledge to end the war there by the close of 2014.

"By giving them back these five real high-ranking leaders of the Taliban, there'll be freed from Qatar in a year and be able to enter the fight, just as we are pulling out of it. And I think it puts the 9,800 troops of ours, the 5,000 from NATO at greater risk than they would have been a couple of weeks ago," McKeon said in an interview on Fox News Tuesday.

CBS News National Security Analyst Juan Zarate concurred that it's not clear the U.S. has thought through what momentum the Taliban has gained by securing the release of five of their former senior leaders.

"What does this mean for the next two years of our soldiers? Have we given them a strategic victory that will put our soldiers at risk?" Zarate asked. And in the longer term, he wondered, "are we putting at risk the Afghan government," especially considering the spate of violence that has occurred in Iraq recently.

The administration has defended the decision by pointing to a few former generals who said over the weekend that the detainees who were released "are not supervillains," and that Bergdahl's return to the U.S. means the Taliban no longer has a pawn to play. But officials, including Secretary of State John Kerry, have been vague in describing what sort of steps the U.S. has take to assure the men don't return to battle.

Hagel will also likely be subjected to questioning about his own role in approving the exchange. McKeon said on Fox News that administration officials told lawmakers on Monday that Hagel made the final decision to approve the swap.

"I hope they're not just pushing him out to be a fall guy for this," McKeon said. "That's almost as unsettling as thinking the president made the decision, and now they're saying Secretary Hagel made the decision."

"I think they're parsing words, worrying about who gets the blame, if things really go bad," he added.

Hagel told NBC earlier this month that he "signed off on the decision" but that "the president made the ultimate decision."

The hearing also stands to set the tone for what further action the Senate takes. Senate Armed Services Committee chairman Sen. Carl Levin, D-Mich., said he "whether there is anything further to be asked" after the House hearing that would benefit from an open session.

"There are advantages to closed, we hear things that you can't hear in open. There's advantages to open, we'll hear that tomorrow, the House will hear it. And so then we'll make a decision after the House hearing as to whether there is any additional information which should be brought out at an open hearing that was not brought out," he said.