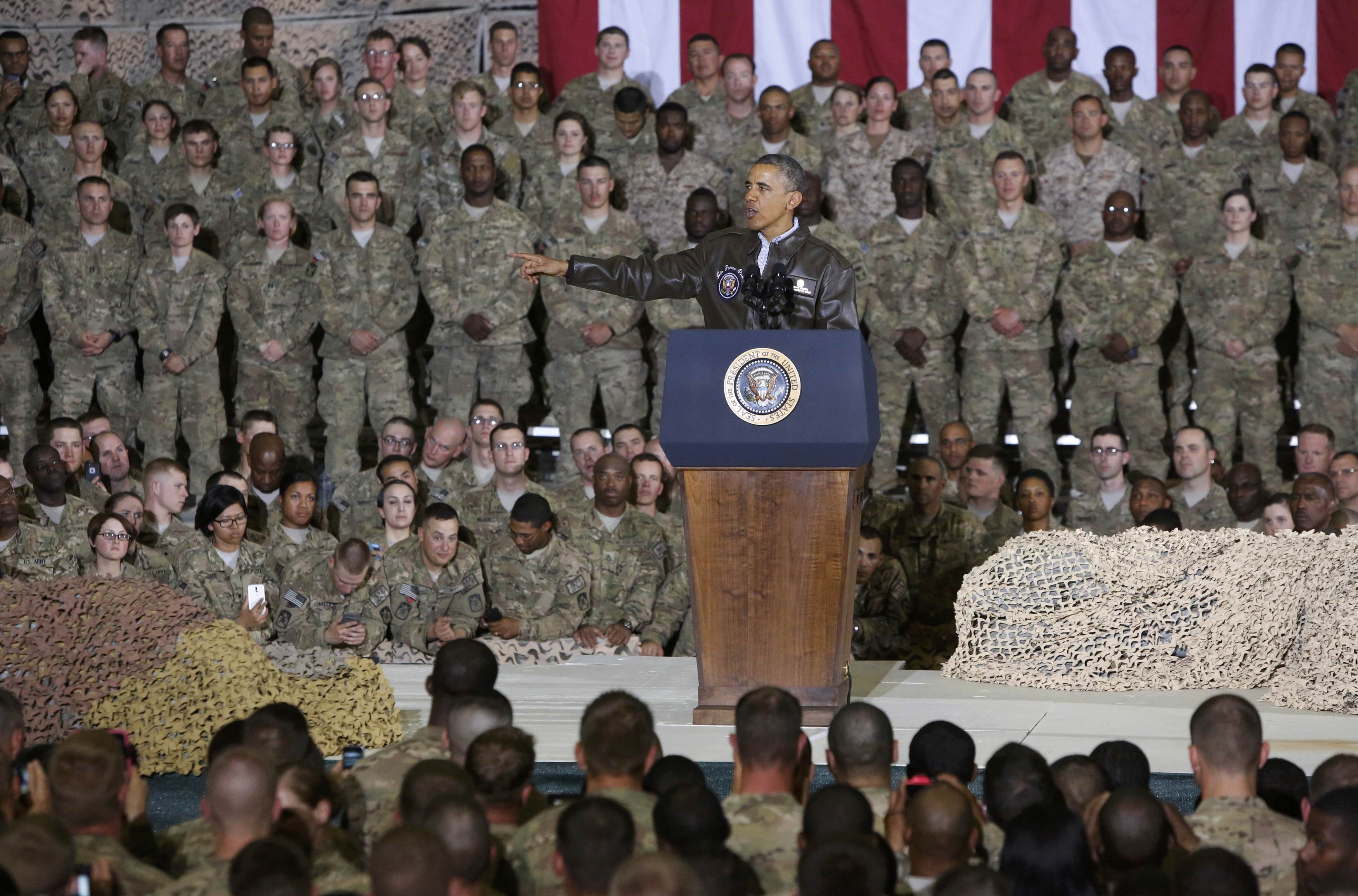 President Obama made a surprise trip to Bagram Air Field in Afghanistan Sunday, thanking troops for their service on the Memorial Day holiday and promising to bring the nearly 13-year war there to a close at the end of the year.

In a late-night speech to soldiers at the air base, the president said he represented the 300 million Americans who wanted to say thank you to the troops as well.

Declaring a "pivotal moment" in the war that has lasted more than a decade, Mr. Obama said the U.S. combat mission will come to "a responsible end" at the end of 2014, but that he is still seeking a bilateral security agreement that will allow the U.S. to maintain a limited military presence in the country beyond the end of the year. Afghan President Hamid Karzai has refused to sign such an agreement, even though helped negotiate it, although the candidates running to succeed him in office are likely to do so.

While Mr. Obama did not announce how he plans to handle the post-2014 transition in Afghanistan during his remarks, he told reporters after a briefing with military officials that he expects to announce his decision "shortly."

"I thought it was important for me to check in directly with folks face to face before those decisions were finally made," he said.

Speaking to soldiers at the air field, the president said he hoped to sign a bilateral security agreement to "preserve all the gains that you have helped win." He said he wants to ensure that Afghanistan will never again be used to launch an attack on the U.S., as it was in September 2001.

"I think the important principles there are...continued training of the Afghan National Security Forces and supporting their counterterrorism operations," he said.

The president credited the U.S. troops at Bagram with the country's progress in recent years as Afghan forces have taken the lead on security and communities have been able to rebuild. Although Afghanistan is "still a very dangerous place," the president said, girls have returned to school and there have been dramatic improvements in life expectancy, literacy and other benchmarks. U.S. troops have allowed the Afghan people to "have hope for their future," he said.

"Everybody who has served here and all the members of our coalition can be proud because you are completing the mission," the president said. "You've helped prevent attacks and saved American lives back home. Al Qaeda is on its heels in that part of the world and that's because of you."

This is the president's fourth trip to the nation during his presidency. As with previous visits to the country, it was not announced to the press beforehand. Mr. Obama left Washington late Saturday evening and flew through the night. He was only on the ground for a few hours Sunday before returning to the U.S.

In addition to meeting with military commanders and holding the rally, the president visited wounded troops. He was accompanied by country music star Brad Paisley, who gave a performance at the base. Mr. Obama did not travel to the capital, Kabul, or meet with Karzai.

Rhodes said the administration had been trying to plan a trip to thank the troops for some time, and the timing was good. The president did not meet with Karzai or candidates in order to avoid injecting America's presence into the ongoing election.

The president's trip came as he faces criticism at home over allegations of misconduct at Veterans Affairs medical facilities across the country. In his weekly address Saturday, he called on the nation to "keep working to make sure that our country upholds our sacred trust to all who've served."

Although he did not directly address the VA scandal, he reaffirmed U.S. support for both members of the military and their families as service members return home from war.

He will visit Arlington National Cemetery Monday to mark Memorial Day and lay a wreath at the Tomb of the Unknown Soldier, and will also deliver the commencement address at the U.S. Military Academy at West Point this week.