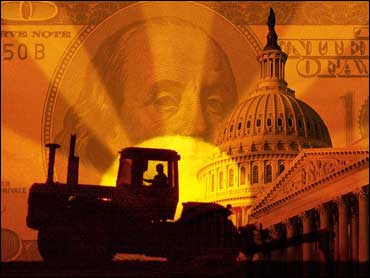 Congress enacted a massive $290 billion farm bill for a second time on Wednesday after a clerical error in the first bill threatened delivery of U.S. food aid abroad.

The Senate voted 80-14 to override President Bush's veto of the legislation, more than the two-thirds majority necessary to enact it. Bush vetoed the bill for a second time earlier Wednesday, and the House voted 317-109 to override it a few hours later.

Most of the bill was enacted in May, when both the House and Senate easily overrode Bush's first veto of the legislation. But 34 pages of the bill that would extend foreign aid programs were mistakenly missing from the parchment copy Congress sent to the White House, so that section did not become law.

To ensure the aid continues amid a global hunger crisis - and to prevent future legal challenges - Congress and Bush again passed, vetoed and enacted the entire bill to provide farm subsidies, food stamps and other nutrition programs over the next five years.

The mistake has delayed shipments of food to Ethiopia, Myanmar and Somalia, said Stephen Driesler, the U.S. Agency for International Development's deputy assistant administrator for legislative and public affairs.

"We have orders ready to go," Driesler said.

Bush contends that the legislation, which extends agriculture and nutrition programs, is too expensive and too generous with subsidies for farmers. He opposed the legislation from the start and began threatening to veto it last July.

He said Congress missed an opportunity to make the bill better when it was passed a second time.

"For a year and a half, I have consistently asked that the Congress pass a good farm bill that I can sign," Bush said after he vetoed the bill for the second time. "Regrettably, the Congress has failed to do so. At a time of high food prices and record farm income, this bill lacks program reform and fiscal discipline."

About two-thirds of the farm law pays for domestic nutrition programs such as food stamps, which will see increases of around $1 billion a year. About $40 billion is for farm subsidies, and almost $30 billion will go to farmers to protect environmentally sensitive farmland.

Congress has overridden Bush on only one other bill - a measure authorizing $23 billion in water projects that was enacted in November.