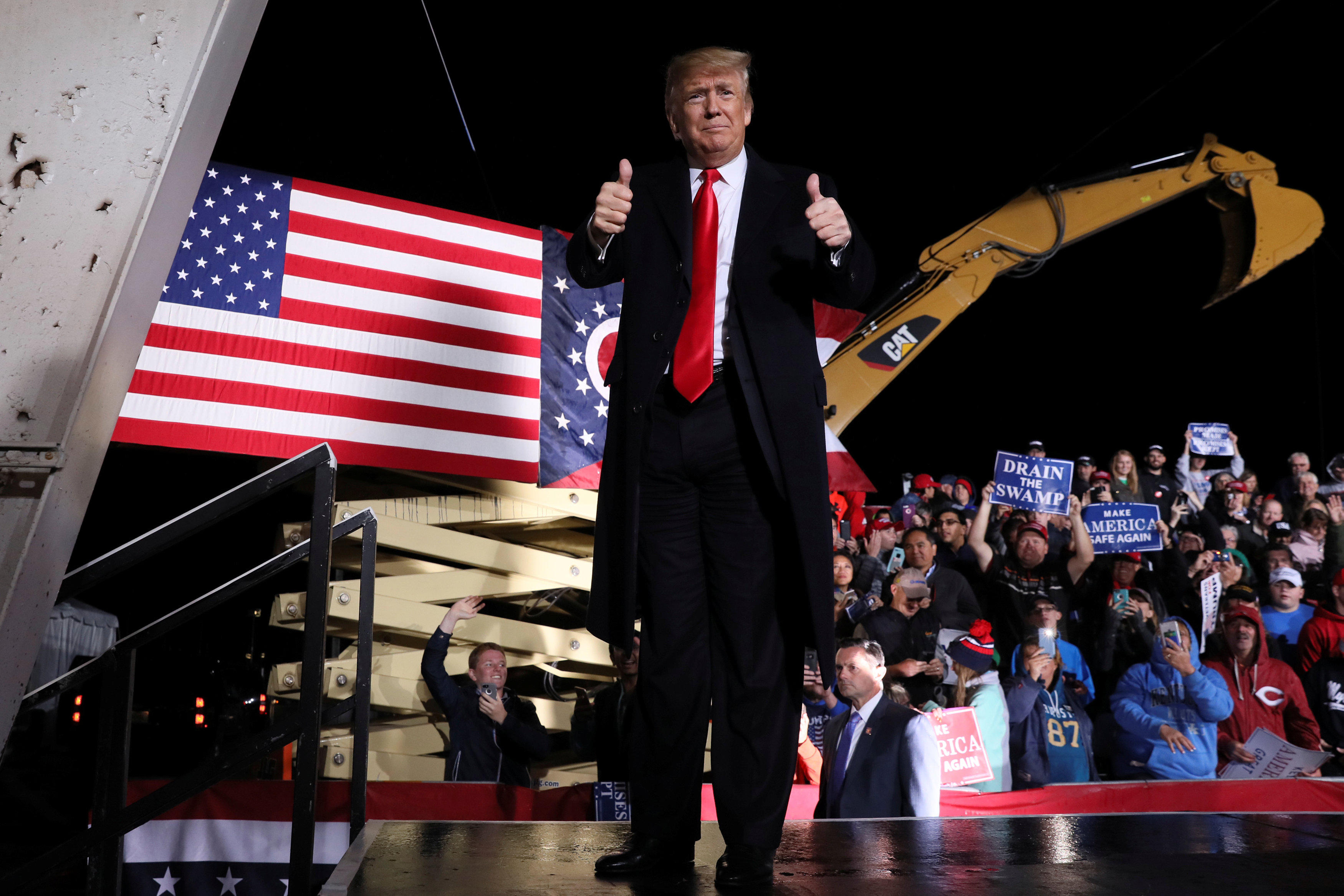 Congress is heading toward a post-election showdown over President Trump's wall along the U.S.-Mexico border, as GOP leaders signal they're willing to engage in hardball tactics that could spark a partial government shutdown and the president revs up midterm crowds for the wall, a centerpiece of his 2016 campaign and a top White House priority.

Mr. Trump is promising voters at rallies across the country that Republicans will bring tougher border security in campaign speeches that echo those that propelled him to office two years ago. House Speaker Paul Ryan, promised a "big fight" over the border wall money and Senate Majority Leader Mitch McConnell, has not ruled out a mini-shutdown as GOP leaders look to help Trump "get what he's looking for" on the wall.

"Democrats want to abolish America's borders and allow drugs and gangs to pour into our country," Mr. Trump said without evidence Wednesday during a swing through Erie, Pennsylvania.

"Right after the election we're doing something very strong on the wall," Mr. Trump added Thursday in an interview on "Fox & Friends." The president reiterated in a rally on Friday in Lebanon, Ohio, that Democrats were "bad people" and "the party of crime."

Republicans are steering clear of shutdown politics ahead of the Nov. 6 midterm election. They know voters have soured on government dysfunction, hold low views of Congress and are unlikely to reward Republicans — as the party in control of Congress and the White House — if post offices, national parks and other services are shuttered.

GOP leaders struck a deal with Democrats earlier this year to fund most of the government into next year. They presented their case to Mr. Trump in a White House meeting in September — complete with photos of the border wall under construction. Mr. Trump, who previously warned he would not sign another big budget bill into law without his border funds, quietly signed the legislation before the start of the new budget year Oct. 1.

Left undone, however, is the portion of the government that funds the Department of Homeland Security, which oversees the border, and a few other agencies. They're now running on stopgap funds set to expire Dec. 7.

The deadline sets the stage for a new round of budget brawls.

"We intend on having a full-fledged discussion about how to complete this mission of securing our border and we will have a big fight about it," Ryan said in a speech at the National Press Club.

Asked if he made a commitment to Mr. Trump for a shutdown over wall funds, Ryan said blame would fall to Democrats, who are in the minority in Congress and largely oppose increased funding for the wall. Mr. Trump promised during the campaign that Mexico would pay for the wall — a claim Mexico rejects and Republicans routinely ignore.

"We have a commitment to go fight for securing the border and getting these policy objectives achieved," Ryan said.

House Republicans approved $5 billion for Mr. Trump's wall, including physical barriers and technology along the U.S. southern border, in a key committee, although it comes without Democratic support. A bipartisan bill being considered in the Senate allocates $1.6 billion for the wall, far short of the $5 billion the White House is seeking as part of a $25 billion, five-year plan to complete the project. Mr. Trump has repeatedly claimed in campaign rallies that the wall is already being built.

House Majority Leader Kevin McCarthy, upped the stakes Friday by introducing legislation for the full $25 billion in border funds as he bids for Ryan's job as the speaker retires.

"For decades, America's inability to secure our borders and stop illegal immigration has encouraged millions to undertake a dangerous journey to come here in violation of our laws and created a huge loophole to the legal channels to the immigration process where America welcomes immigrants to our country," he said in a statement to Breitbart, which first reported on the bill.

McCarthy's toured the southern border this week to make the case for the wall as he seeks to shore up support from conservatives skeptical of his possible leadership promotion.

McConnell predicted a "lively" lame-duck session and didn't close the door on the possibility of a mini-shutdown.

"We've got a lot of work left to do," he said in an AP Newsmakers interview. "That episode, if it occurs, would be in that portion of the government that we haven't funded."

Asked how much money Congress would try to secure for the border wall, McConnell said, "We're going to try to help (Trump) get what he's looking for."

McCarthy is also running to be the next speaker of the House after current Speaker Paul Ryan steps down this year. However, he is facing an unexpectedly serious challenge from Ohio Rep. Jim Jordan, a hard-right member of the Freedom Caucus.

The chairman of the Senate Appropriations Committee, Sen. Richard Shelby, said Senate Republicans are willing to fight for more than the $1.6 billion currently being considered, but stopped short of predicting how much money Congress would approve.

"I think it's going to be a big fight," Shelby said.

The midterm results will play a key role in how the fight over wall funding is resolved. If Republicans lose the House majority, as some analysts predict, they will lose leverage, although the GOP would still be able to force House passage of a wall-funding package in the lame-duck session. Prospects are murkier in the Senate, where 60 votes are required to break a filibuster.