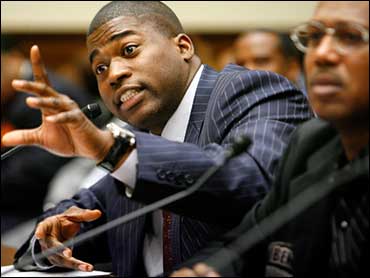 Lawmakers, music industry executives and rappers disagreed Tuesday over who was to blame for sexist and degrading language in hip-hop music but united in opposing government censorship as a solution.

"If by some stroke of the pen hip-hop was silenced, the issues would still be present in our communities," rapper and record producer David Banner, whose real name is Levell Crump, said in prepared statements to a House Energy and Commerce subcommittee hearing. "Drugs, violence and the criminal element were around long before hip-hop existed."

At the hearing, music videos showing scantily clad women were played; music executives in dark suits testified on the uses of the "B," H" and "N" words, and black civil rights leaders talked of corporate exploitation.

"We have allowed greedy corporate executives -- especially those in the entertainment industry -- to lead many of our young people to believe that it is OK to entertain themselves by destroying the culture of our people," E. Faye Williams, chair of the National Congress of Black Women, said in prepared remarks.

"From Imus to Industry: The business of stereotypes and degrading images" was the title of the hearing, referring to former radio host Don Imus, who lost his job after making derogatory comments about the Rutgers women's basketball team. The Imus incident has sparked debate within the music industry about black artists using offensive, misogynist and violent language.

Former rapper Master P, whose real name is Percy Miller, told the panel he is now committed to producing clean lyrics. In the past, seeing his relatives and friends shot and killed, "I just made the music that I feel, not realizing I'm affecting kids for tomorrow." But he said he found he didn't want his own children to listen to his music. "So if I can do anything today to change this, I'm going to take a stand and do that."

"This hearing is not anti-hip hop. I am a fan of hip hop," said subcommittee chairman Bobby Rush, D-Ill., who gained national prominence in the 1960s as the founder of the Illinois chapter of the Black Panthers. But he said there was a need "to address the issue of violence, hate and degradation that has reduced too many of our youngsters to automatons."

Record company executives defended the parental guidance labels and edited versions they said keep the more controversial material away from children and stressed that uniform standards or censorship won't work.

In the '50s people were deeply offended by Elvis Presley, and a decade later many were scandalized by The Beatles and The Rolling Stones, said Edgar Bronfman Jr., chairman and CEO of Warner Music Group.

"We have a responsibility to speak authentically to our viewers," said Philippe Dauman, president & CEO of Viacom Inc., which owns such cable networks as MTV, Comedy Central, Nickelodeon and BET.

He said his company takes an active role in editing obscenities out of music videos and excising gang symbols or portrayals of violence, but "we also believe that it is not our role to censor the creative expression of artists."

Alfred Liggins III, chief executive officer of Radio One, Inc., one of the largest media companies that primarily serves African-Americans, said the company reviews the contents of songs before broadcasting them and takes care to comply with Federal Communications Commission guidelines. But "Radio One is also not in charge of creating content, or in the business of censorship or determining what is in good or bad taste."

"The language and the music we use, we understand it, most of us are not offended by it. It's adult music. When you see the parental advisory on it that makes it a choice, so parents have a choice. The whole thing is crazy and upsets me," Chicago rapper Twista told The ShowBuzz last week in reference to the hearing. "Rap is getting a bad rap and we're taking the blame for everything."

The hearing was reminiscent of, although tamer than, a similar event in 1985. At the earlier hearing, lawmakers where exposed to Van Halen's "Hot for Teacher" and Twisted Sister's "We're Not Going to Take It," and the late rocker Frank Zappa hurled insults at Tipper Gore, wife of then-Sen. Al Gore, and Susan Baker, wife of then Treasury Secretary James Baker, who were urging the recording industry to voluntarily police itself on song lyrics.