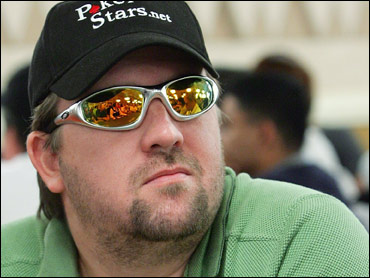 In 2003 an anonymous Tennessee accountant with the unlikely name of Chris Moneymaker invested $100 in an online poker tournament in which the first prize was a $10,000 entry in the annual World Series of Poker championship in Las Vegas.

Moneymaker went on to win the World Series championship bracelet and $2.5 million, igniting the spark that fueled an astounding three-year boom in the business of tournament poker. The combination of widespread television coverage (made possible by the invention of the "hole card" camera that enables viewers to see each player's hidden cards as the play of each hand progresses) and Internet poker, led millions of new players to enter the tournament arena, hoping to duplicate Moneymaker's success.

The simplest way to measure the explosion in tournament poker in the United States is by the number of contestants in the annual World Series of Poker championship event. During its 33-year history prior to Moneymaker's win, the average number of contestants was 181. Three years after Moneymaker appeared on the David Letterman show to talk about his leap from small-stakes online player to world champion, 8,773 players put up $10,000 apiece to compete for the 2006 world championship bracelet and $12.5 million in first-prize money.

Nearly 80 percent of them won their seats by entering inexpensive online tournaments.

A high proportion of the newly minted Internet players are in their 20s and early 30s. Whereas the World Series field used to be composed of grizzled veteran professionals, during the last few years it has been dominated by young neophytes playing in only their first or second World Series competition.

The huge explosion in tournament poker generated a mass market for poker-related products and services. Poker books and television shows proliferated. My TiVo — which is set to record all shows relating to "poker" — used to record a few shows a week. Now it records dozens.

When Greg Raymer won the World Series championship in 2004 after qualifying in an online tournament on PokerStars, he promptly quit his job as an in-house lawyer at Pfizer. PokerStars signed him to an exclusive marketing contract that paid him much more than his law job.

For the last few years, Greg has been featured in PokerStars' television and print ads, encouraging the rest of us amateur players to indulge the fantasy that if we play on PokerStars and win a seat in the World Series, we, too, might be able to quit our day jobs, play poker full time and sign a lucrative endorsement deal with a company marketing to the expanding population of worldwide poker players.

All of this came to a screeching halt last weekend, when an unexpected confluence of political events led Congress to stick a provision into a port security bill at the 11th hour — one that's designed to shut down Internet gaming in the United States.

There were no hearings and no debate in the Senate, originally created by the Constitutional framers to be the "world's greatest deliberative body," where the potential passions of the mob as expressed by the larger, more populist House of Representatives, would be slowed down and moderated by the careful consideration intended by the rules of the Senate.

House Speaker Dennis Hastert, R-Ill., concerned that his involvement with the discredited Jack Abramoff (lobbyist for Indian gaming interests) might jeopardize his re-election prospects in November, instructed the House leadership to pass a bill restricting Internet gaming in the United States — no matter what it took. The House did just that.

Senate Majority Leader Bill Frist, R-Tenn., who would love to run for President in 2008, was eager to do the same in the Senate to show the vocal Christian right wing of his party that he shares their aversion to gambling. (Remember the Reagan days, when the conservative wing of the Republican Party won elections by railing against big government meddling in people's lives? I guess those folks will have to vote Democratic now.)

But Frist could not move a bill through committee and onto the floor prior to the November elections. So he found a way to slide a provision into an unrelated bill designed to increase security at America's ports, without any hearings or debate. At the last moment, just before Congress recessed so Hastert and Frist and their colleagues could go home to campaign for re-election, the Senate passed the port security bill, including the Internet gaming provisions.

For the booming poker industry, this was as bad a beat as losing to a 3-outer on the river. Had the bill not been passed before the recess, it is unlikely it could have passed after the elections. Opponents in the Senate would not have been afraid to stand up and object to an ill-considered bill being tacked onto an unrelated statute without debate or full consideration of the opposing arguments and alternate ways of regulating online gaming. After Election Day the Abramoff scandal loses its power to influence elections.

Technically, the new law does not make it illegal to play poker on the Internet. Instead, it makes it illegal for any bank, credit card company or other financial intermediary to process transfers to or from an Internet gaming site.

In other words, there is no practical, safe way to legally deposit money into your PokerStars account to play in a tournament or take money out if you win.

The word on the street is that three of the largest Internet poker sites — PokerStars, Party Poker and Pacific Poker — will shortly announce that they are withdrawing from the U.S. market. The last of the major sites, Full Tilt Poker, is on the fence about what to do.

My hunch is that the government will turn up the heat on Full Tilt sufficiently to persuade them to follow the same course.

The ramifications for players and for the business of poker are dramatic. Attendance at the World Series will probably drop by at least 50 percent. None of the tens of thousands of Chris Moneymaker and Greg Raymer wannabes will be able to win a seat at next year's World Series by playing online.

The number of poker shows on television will drop as well. (Most are now sponsored by Internet sites. It makes no sense now for them to spend money marketing their sites in the United States.)

The value of tournament purses will drop significantly, as will the value of player endorsement contracts. In sum, Congress will probably succeed in turning the clock back to pre-Moneymaker days, in terms of the size of the tournament poker market in the United States. A bad beat for the shareholders who invested in poker industry stocks. Harrah's, which hosts the World Series, will take a hit as will businesses that invested in the booming poker industry.

I predict things will not stay this way for long. Once the election is over, those with an economic interest in the poker industry (including the banks and credit-card companies) will prevail on Congress to replace this hastily contrived political fix with a more sensible legislation that legalizes, regulates and taxes online gaming.

Already the countries where online gaming sites are incorporated are objecting to the United States barring them from the U.S. market. The World Trade Organization, of which the United States is a member, has held that it violates free trade agreements signed by the United States. (When the United States tried to argue that each country has the right to ban products that offend its moral values, the WTO pointed out that gaming is legal in nearly every U.S. state in the form of horse racing, dog racing, state lotteries, jai alai and more.)

Imagine if the federal government banned every form of activity that Congress deemed bad for us — smoking and drinking, for example. The last time they tried that, in Prohibition days, it was a fiasco. For now, I expect that a number of Internet "speakeasy" sites will crop up, looking to profit from the market that has been abandoned by the reputable sites like Party Poker and PokerStars. Players who send money to those sites and end up getting cheated will have Speaker Hastert and Sen. Frist to thank.

I haven't thought about moving to Canada since Lyndon Johnson and Robert McNamara threatened to draft me to fight in a war I believed was wrong-headed and unjustified. Hastert and Frist may have finally pushed me over the edge. After all, how else can I become the next Greg Raymer?