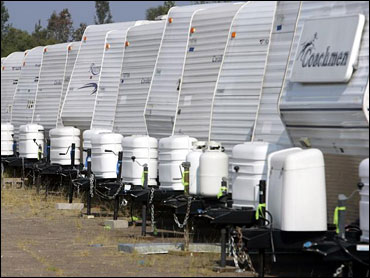 Earlier this week, CBS News chief investigative reporter Armen Keteyian reported that 21 months after Katrina, there is a public health crisis along the Gulf Coast.

Children are getting sick after prolonged exposure to fumes from the toxic chemical formaldehyde used in construction of thousands of FEMA travel trailers.

In the wake of that report, there are now calls for a Congressional investigation, and new information that FEMA may have known about the problem more than a year ago.

As CBS News reported earlier this week formaldehyde fumes seeping from these trailers pose a serious health threat to some young children. On Wednesday, the man in charge at FEMA, David Paulison, had this to say on Capitol Hill: "The formaldehyde was brought to our attention and we went out and investigated and used the EPA and other agencies to do testing, and we've been told the formaldehyde does not present a health hazard."

Paulison's comments were based upon this report, publicly released by FEMA two weeks ago.

But according to this internal FEMA document obtained by CBS News, FEMA knew of extremely high levels of the cancer-causing chemical more than a year ago, after its own employee safety department ran tests in March 2006.

Those tests, done on 28 trailers, found at least 20 had levels of formaldehyde — much higher than the EPA's recommended workplace limit of .1 parts per million. In one case, as much as 1,000 percent higher.

"This takes the cake," Sen. Mary Landrieu, D-La., said. "Now people living in the trailers have to worry if their children are breathing fumes that could cancer or some other disease."

After our report, Landrieu called for an investigation. A Republican Congressman has also called for hearings into what FEMA knew and when.

Today, a FEMA spokesman said the internal document presented a "worse case scenario" and that we were misinterpreting the data. They also told us that the Chief Medical Officer for Homeland Security has begun looking into the matter.