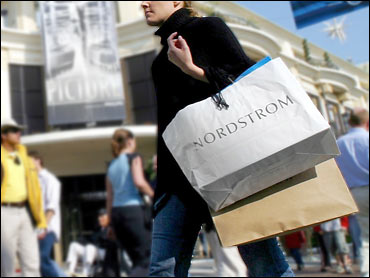 While the country is in a recession, many Americans are cutting down on extras and getting by on less. But there are still between 17 and 18 million Americans who suffer from compulsive shopping or a spending disorder.

MTV's show "True Life: I'm A Compulsive Shopper" follows two young girls who can't stop, even when they could lose everything.

One of the subjects, Ali Owen, and Terrence Shulman, director of the Shulman Center For Compulsive Theft and Spending visited The Early Show to discuss the problem with co-anchor Maggie Rodriquez.

Asked how she can afford such debt, she told Rodriguez, "A lot of it is bouncing checks. A lot of it is money that I don't have."

So why does she do it and how does it make her feel?

"It makes me feel alive, and like I can have anything. 'I'm as good as anyone else.' A lot of it is the fact that I'm insecure. So, walking out of the store with anything makes me feel as good as the girl next to me," Ali explained.

But that feeling, she said, only lasts for a little while.

Asked what he thinks Ali is really shopping for, Shulman said, "I want to commend Ali coming on at the ripe age of 20! You're highlighting a growing problem for all Americans, and particularly young people. We talked in the green room. I'm looking forward to the MTV piece. We mentioned, how, without blaming your parents, there was a pattern in your life of being rewarded every time you did something good or got a good grade, and you go out shopping. So, we have to be careful as parents what we are modeling for our kids."

"Thinking you're doing a good thing by rewarding you might be hurting them," Rodriquez remarked.

"Some of your fondest memories were of going shopping and getting something, the excitement, the validation," Shulman said.

Asked if he thinks that's where the insecurity comes from, Shulman said, "Well, we also talked about how you have been in counseling and therapy and you peel back the layers. Growing up in a small town and feeling like you never quite belonged, and feeling maybe if you had the right things you would fit in. But what you found was just the opposite."

"You've been struggling to find where you belong, even among your current friends, who also like to shop. A lot of people are trying to find their identity through shopping or image. 'Who am I and where do I belong?'" he added.

Ali said she's now seeing her therapist once or twice a week. "I go to my local Debtors Anonymous group; surrounding myself with a good support system is absolutely necessary. I have right now paid off one of my first debts."

Asked what advice she can offer to people who can relate to what she feels, Ali said, "Have a good support system. Be self-aware. This is a growing issue. Don't look to the media for your self-image. Like yourself, love yourself, and know yourself."