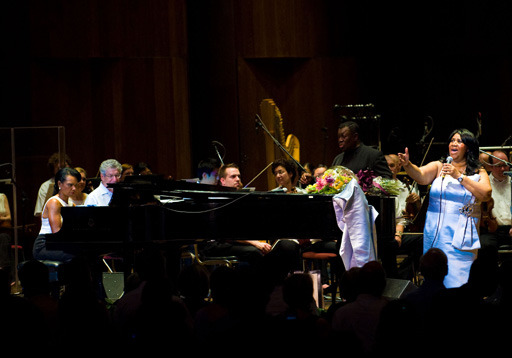 For an estimated crowd of 8,000, Rice, who is a classically trained pianist, took to the stage and accompanied Franklin while she sang her hit "I Say A Little Prayer" as well as "My Country 'Tis of Thee."

Their aim was to raise money for programs that support inner city children and awareness for music and the arts.

"It is a joint effort for the inner-city youth of Philadelphia and Detroit," Franklin told The Associated Press the night before their concert with the Philadelphia Orchestra.

"We decided to give it a try," Franklin said. "So here we are, in the city of Brotherly - and Sisterly - Love."

Earlier in the program, Rice, the Republican former aide to President George W Bush, performed a selection from Mozart's Piano Concerto No. 20 in D Minor with the orchestra, a piece she said she had practiced furiously.

The two met while at White House function, Rice recalled. "We were just talking and chatting and she said, 'You play, don't you?' And I said, 'Yes.' And she said we should do something together."

Franklin was surprised to learn that Rice played classical music.

"All I had seen of Dr. Rice was in a political atmosphere. It just seemed foreign that she would be a classical pianist."