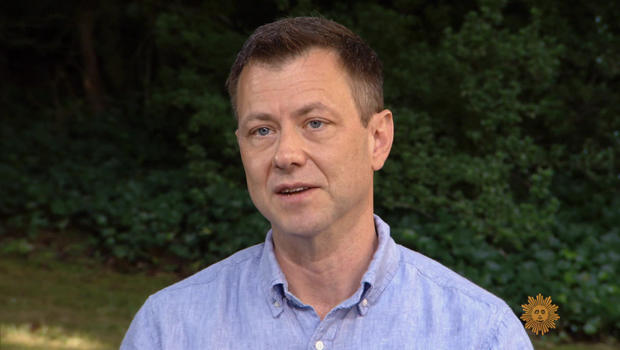 "Nobody had any joy in doing this. Nobody was seeking to try and open that case," said Peter Strzok, the FBI agent who started it all – opening the investigation into Donald Trump's campaign three months before the 2016 presidential election.

CBS News national security correspondent David Walsh asked, "You're the guy that writes the official document that opens the investigation?"

"I do, sitting right inside the house," Strzok said.

Inspired by Mick Jagger, of all people, he code-named it Crossfire Hurricane. "'Jumpin' Jack Flash' was running through my mind, and one of the lyrics, Mick Jagger kind of swaggering and saying, 'I was born in a crossfire hurricane.' And I thought, 'That's a pretty good name.'"

Attorney General William Barr has said Crossfire Hurricane was based on a "very thin, slender reed."

In his new book, "Compromised: Counterintelligence and the Threat of Donald J. Trump" (Houghton Mifflin Harcourt), Strzok describes exactly what that reed was.

In May 2016, just as Mr. Trump was emerging as the unlikely Republican frontrunner, George Papadopoulos – at the time a very young foreign policy advisor to the Trump campaign – was in London having drinks with some Australian diplomats.

"Papadopoulos told them that somebody on the Trump campaign had received an offer that said the Russians had material that would be damaging to Hillary Clinton and to Obama, and they offered to coordinate the release of that information in a way that would help the Trump campaign," said Strzok.

The Australians didn't make much of it – until Mr. Trump made this appeal about Hillary Clinton's e-mails, on July 27, 2016: "Russia, if you're listening, I hope you're able to find the 30,000 emails that are missing."

Those Australian diplomats heard that – and contacted the FBI.

Strzok said, "When they saw that statement by Trump, that triggered the memory of the conversation they had with Papadopoulos."

"So, Donald Trump, with his own words, brought this investigation down on himself?" asked Martin.

"According to what the foreign government told us, yes."

"Give me the theory of the case when you opened the investigation."

"Russia had offered to assist electing someone to be President of the United States," said Strzok. "From an intelligence perspective, I can't think of anything more significant."

Strzok identified four suspects in the Trump campaign – Papadopoulos, Carter Page, Paul Manafort and Michael Flynn – based on their contacts with Russian officials.

That's Flynn, a retired lieutenant general who would become President Trump's first national security adviser, seated next to Vladimir Putin at a 2015 dinner in Moscow:

But the FBI turned up nothing incriminating on him.

Martin asked, "So, were you ready to close your investigation of Flynn?"

"We were," Strzok replied.

"That obviously didn't happen. What changed?"

"He had a bunch of phone calls and contacts with the Russian ambassador to the United States."

"What's wrong with that?" asked Martin.

"I think what makes [it] a problem is when you look at the content and nature of the things that Flynn tells the ambassador."

Flynn asked Kislyak not to retaliate for Obama administration sanctions against Russia. The conversation, in which Flynn potentially interfered with President Obama's foreign policy, was recorded by U.S. intelligence.

So, instead of closing the case, Strzok sat down to question Flynn. "The strangest thing happened: It was very clear he wasn't telling the truth, and we repeatedly tried to get him to that by using and offering phrases, the exact things he had said with the ambassador in the conversations."

As a former head of the Defense Intelligence Agency, Flynn knew his conversations with the Russian ambassador would be monitored.

"It's the damnedest thing," said Martin. "He knew you knew, but he still denied it?"

"It sounds like the old Washington story – the cover-up is worse than the deed itself."

Strzok said, "And to this day, I don't think we yet know the true story of what was behind General Flynn's statements to us."

Flynn pled guilty to lying. But now, the Justice Department has moved to dismiss the charges because, Attorney General Barr told CBS News, the FBI kept the case open just so Strzok could try to catch Flynn in a lie.

"They kept it open for the express purpose of trying to catch, lay a perjury trap for General Flynn," Barr said.

Flynn's case pales next to that of another Strzok suspect, Paul Manafort, who served as Trump's campaign chairman.  According to a new report by the Senate Select Committee on Intelligence, Manfort was "a grave counterintelligence threat" who "sought to secretly share" with a Russian intelligence officer "senstive campaign polling data."

Martin asked, "If it's their poll, isn't it theirs to give to whoever they want to give?"

Strzok replied, "If you're giving that to somebody who is passing it to a foreign adversary who is targeting our elections, how is that possibly okay?"

"Whether or not it's a crime, to me, it's unequivocally unpatriotic," Strzok replied.

By the time Manafort was convicted of tax evasion and bank fraud, Strzok was no longer on the case.  He had been fired by Special Counsel Robert Mueller for sending anti-Trump text messages to FBI lawyer Lisa Page, with whom he was having an affair.

"And then, one week later, you opened that Crossfire Hurricane investigation," Martin said. "I mean, it just looks like you saw a way to stop Donald Trump from becoming President of the United States."

"I can understand why some people might think that," Strzok said. "But they had nothing to do with each other."

One week after Strzok opened the investigation, Lisa Page texted him:

Martin asked, "So, why shouldn't Trump supporters suspect you of using the investigation as a tool to take him down?"

"What I'd point them to are all the investigations that have been done that have conclusively proved that didn't occur," he replied.

The Justice Department Inspector General found no "evidence that political bias ... influenced" the opening of Crossfire Hurricane. But it did find "serious performance failures" in the investigation of another Stzrok suspect, campaign adviser Carter Page, who was never charged with any crime.

"Is it sloppy work?" Martin asked. "Or is it FBI agents trying too hard to get something on members of the Trump campaign?"

"I don't think at all that it's anything improper," Strzok said. "You get people who are overworked, who make mistakes, and don't get me wrong, inexcusable mistakes."

Attorney General Barr disagrees. In April he told Fox News, "The evidence shows that we're not dealing with just mistakes or sloppiness.  There is something far more troubling here, and we're going to get to the bottom of it."

One FBI lawyer, Kevin Clinesmith, has already pled guilty to falsifying a document, and U.S. Attorney John Durham is conducting a full investigation into the conduct of Crossfire Hurricane, which will include a re-examination of Strzok's every move.

He remains branded – you might say "compromised" – by his text messages. The president has accused Strzok of "treason," lambasted him on Twitter, and even ended his famous Helsinki press conference with Vladimir Putin like this:  "And if anybody watched Peter Strzok testify … it was a disgrace to the FBI. It was a disgrace to our country."

Martin asked Strzok, "How does it feel to be in Donald Trump's crosshairs?"

He replied, "It's horrible. It angers you. It scares you."

That hasn't stopped Strzok from putting one of the president's tweets ("Peter Strzok is a fraud") on the cover of his book.

"You know, it's going to put you back in the crosshairs," said Martin.

"Yes," Strtzok replied. "David, this is a threat that we have not faced in our modern history. What Russia is doing, what they did in 2016 to attack our election, to help Trump, what they are doing now to do the very same thing is something every American ought to be thinking about and considering."