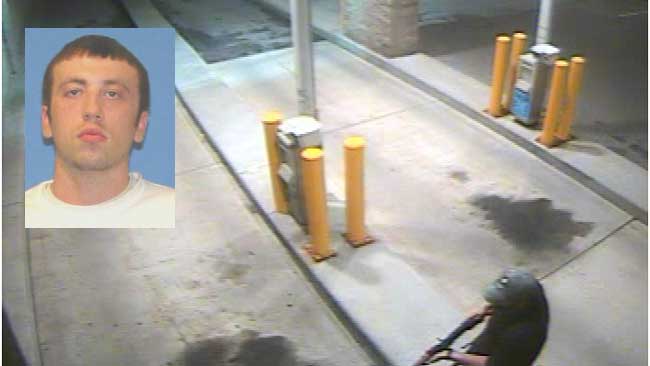 EAU CLAIRE, Wis. -- The man who abducted a former co-worker outside a Wal-Mart in Mukwonago, Wis. before she escaped 230 miles away in Eau Claire told her she had broken his heart and that the kidnapping was the only way they could be together, court records show.

Mitchell Owens, 24, of Burlington, was found dead of an apparent self-inflicted gunshot Tuesday in a wooded area near Eau Claire. The 21-year-old woman he had abducted outside the Wal-Mart where she worked escaped the day before when they stopped at a Kwik Trip in Eau Claire.

The victim told investigators she recognized Owens as a former co-worker when he walked up to her Monday about 3 a.m. outside the Wal-Mart and ordered her into his car at gunpoint, according to a criminal complaint filed against Owens in Eau Claire County Tuesday. The woman said Owens told her that he would shoot her if she didn't get into the vehicle.

Police released a surveillance image of a man they said was Owens, apparently carrying a long gun in the parking lot of the Mukwonago Wal-Mart.

The woman said she tried to convince Owens that she would break up with her boyfriend so the two of them could hang out again, court records say, but Owens didn't believe the woman.

After the woman escaped Monday, Owens led authorities on a high-speed chase east of Eau Claire. He crashed his vehicle in the town of Seymour and took off into the woods on foot.

More than 200 officers and 30 agencies from northwestern Wisconsin were part of the search for Owens, the Eau Claire Leader-Telegram reported. Some residents in the area were evacuated as a precaution.

"We pulled out all the resources . for the safety of the community," Eau Claire County Sheriff Ron Cramer said. "Had (Owens) gotten out of the area, we don't know what he would have done."

The woman told police he also had a machete and a pocketknife, along with what she described as a "survival kit" in the back seat, reports the paper.