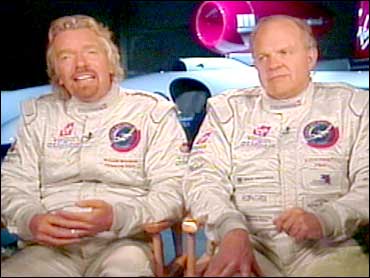 For years, they competed against each other in an effort to become the first to fly a balloon around the world. Fossett accomplished the incredible feat of endurance in 2002. Now, they're teaming up for another daring adventure -- to become the first to circumnavigate the globe non-stop in a single-engine aircraft.

The two men discussed their adventurous plan with The Early Show on Thursday.

"This is viewed as a major goal in aviation," says Fossett, who is planning to take the controls. "This is an opportunity to do something new. No one has ever flown solo non-stop around the world."

Branson explains the aircraft was built in the Mojave Desert out of composites.

"It actually carries four times its weight in fuel," he says. "Hopefully, it's capable of staying up in the air for 80 hours. It's not an easy feat. I mean, other people have attempted it and failed. And one or two people, it has cost their lives. So, I'm hoping that Steve [Fossett] stays well and remains the pilot of this particular adventure."

Fossett will be responsible for the air traffic communication and flying the airplane – all within 80 hours. The adventurer says he will be able to do it.

"I have done it in ballooning, stayed awake that long flying, and also in sailing single-handed," says Fossett. "The Williams jet engine is highly reliable. In fact, that's one of the things we want to show is the increased reliability and fuel efficiency of jet engine aircraft. Yeah, we're confident that the technology is there and we can achieve this."

The two say the flight is planned to start in April, but it is more likely it will be done later in the year. Both times are the only part of the year that have the necessary strong winds from jet streams to make the mission a success, they say.

Fossett and Branson would start their flight from central United States, climb up into a jet stream initially at 41,000 feet and slowly climb up to 52,000 feet. The route will go up over the north Atlantic, probably over London and through Europe, down through Egypt, across the Persian Gulf and India and China, go through Hawaii, to California and back to the central United States.

It will take the plane three hours to get to cruising attitude.

"There's a lot of danger, in fact, right at the start of the flight," says Fossett. "That will be the first time that this plane has ever flown at its full weight. And that will be the demonstration that the plane can operate at the edge of its envelope. So, there's risk about structural failure at takeoff if we've gotten the engineering wrong and possibility of failure if I hit turbulence."

Branson is the reserved pilot and he jokes that he has a lot of catching up to do.

"I still have to get my private pilot's license," he says. "If Steve were unable to fly, the project would have to be delayed by a few months until I got up to speed. But as an adventure, I've been through that before with ballooning and boating where I wasn't experienced before."

If the two are successful in the adventure, they say there would be new goals to accomplish in the aviation world.

"You need to use your imagination as to the important things left to do," says Fossett. "We don't often talk about the things that we would like to do in the future because we don't want to really tip off someone else. There's lots of exciting things to do that have never been done."