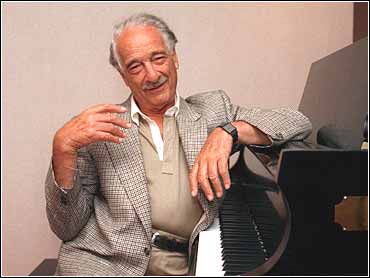 Victor Borge, the daffy pianist whose whimsical approach to the classics earned him the moniker the "clown prince" of Denmark and the "unmelancholy Dane" of international show business, died Saturday. He was 91 and would have turned 92 on Jan. 3.

Borge's daughter, Rikke Borge, said her father died peacefully in his sleep at his home as the family was gathering to celebrate Christmas. He had just returned from a trip to Copenhagen, the city of his birth.

"The cause of death was heart failure," added daughter Sanna Feirstein.

For decades, Borge delighted audiences by deflating the pomposity of classical music. He fell off his bench, played music upside down and repeatedly milked laughs from such classic routines as "phonetic punctuation" in which he used goofy sounds to indicate commas, periods and question marks in his monologue.

"I think he brought laughter to every person he came in contact with," Rikke Borge said Saturday. "He had a long and happy life."

Borge kept up a busy career into his 80s, touring and issuing videos, including his most popular, The Best of Victor Borge, which sold some 3 million copies. His longtime agent, Bernard Gurtman, said he had had concerts booked for the next two years.

"He had so much on the table, and to the day he died he was creative, and practicing piano several hours a day," Gurtman told Reuters. "He was just a great inspiration."

"Some people reach the point where they must try desperately to hold on to something that isn't there anymore, no matter how great they are," Borge said in an interview in 1986. "This is where I am very, very lucky. We all do what we can, we all have limitations. Apparently, within my limitations, there is enough to go on and on and on and on."

"Playing music and making jokes are as natural to me as breathing," Borge told Reuters in an interview in 1989.

"That's why I've never thought of retiring because I do it all the time whether on the stage or off. I found that in a precarious situation, a smile is the shortest distance between people. When one needs to reach out for sympathy or a link with people, what better way is there?"

Borge performed 100 or more nights a year, sometimes as pianist and sometimes as conductor, usually as a clown but sometimes in dead earnest. In his later years, he directed Mozart's Magic Flute in Cleveland and prepared a concert version of Carmen.

In 1999, he was one of five performers selected for the Kennedy Center Honors.

"He's never said a four-letter word, never had any dirt," Gurtman said. "He's a total professional that you meet once in your life. He was a trailblazer like Milton Berle, he did it once, and did it live."

Borge was born Jan. 3, 1909, as Boerge Rosenbaum to a family of musicians. He learned English by spending day after day in movie theaters and memorized some of his routines phonetically. Rdy Vallee later gave him a shot at radio, and he became a regular on Bing Crosby's Kraft Music Hall.

He changed his name to Victor Borge when he came to America because it sounded more American and was easier to pronounce, his daughter said.

As a child, Borge spent hours at the Royal Theater in Copenhagen where his father, Berhard Rosenbaum, was a violinist. A few years ago, Borge returned to the theater to fulfill a longtime dream of conducting the Royal Theater's symphony orchestra. He was scheduled to conduct there again in 2001.

"He was an incredible human being," said Niels Joergen Kaiser, a close friend of Borge's in Denmark who wrote the entertainer's 1999 biography. "He was gifted. He was able to combine musicality and humor."

In 1953, Borge's one-man show, Comedy in Music, began a run of 849 performances, the Broadway record for a solo show. He revived it in 1977 in a limited run of one month that was extended to two.

Despite his fame, Borge felt an insecurity that kept him from a leisurely retirement or from indulging his passion for sailing.

"When you are trying to defend a position, or create a position, in any field in your life, then every change, every move, has to be defended," he said in 1986. "Every move can be the end of it or an advance. You have to be courageous."

His routines came from reality. Borge once saw a pianist slide right off his bench while playing a concerto, and he recreated that disaster hundreds of times.

"I do a thing with a page turner. Everybody who has ever tried to have a page turner knows that it is terribly dangerous, and the better musician you are the more you have been exposed to mistakes," Borge said. "So, when I do that routine the orchestra members just fall off their seats. They all know.

"Many in the audience also know it, but the ones who do not know the reality will laugh at the clowning of it."

In his moments of serious playing, Borge was praised as a distinguished proponent of the Romantic style, but his serious recordings amounted to one side of a record. He said a microphone made him nervous, "because as a musician I know how to do it and I know I can do it. And if it doesn't turn out the way I really can do it, I don't want it."

Borge made his concert debut as a pianist at age 13, but his friends knew him as a parlor comedian In 1931, a new career opened when he wrote the music for an amateur show and then substituted for the star.

Borge often made Adolf Hitler a butt of his jokes, and he was fortunate to be in Sweden when the Nazis invaded Denmark in 1940. Soon after, he and his American wife, Elsie, left for the United States, arriving with nothing but their Scottish terrier.

He admitted that if it had not been for Hitler he probably would never have pursued a career as a concert-hall comedian.

Until he was forced to flee Denmark in 1940 he was a stage and screen idol in his native country.

But as a Jew who had lampooned Hitler, Borge was in danger and fled first to Sweden and then to the United States, where he arrived penniless and unknown and by a fluke got booked on the Bing Crosby radio show. He was an instant success.

One part of that success wasn't musical: It was verbal, as he fractured English on stage. It endeared him to thousands of other war refugees in the United States after World War II, who also were coping suddenly with a strange language and culture.

Many of his skits were based on real-life events. One of his classics evolved from seeing a pianist playing a Tchaikovsky concerto fall off his seat.

Borge's dog joined the show after it wandered on stage while he was at the keyboard - an entrance nobody would believe had been unplanned.

One incident could not be repeated. A large fly flew on to Borge's nose while he was playing. "How did you get that fly to come on at the right time?" people asked. "Well, we train them," Borge explained.

In an Associated Press interview when he was 80, Borge said "luck, good fortune and stamina" kept him performing.

"I never have to get 'up' for a performance," he said. "The moment I walk on the stage, no matter what my mood, if I have any regrets or feel sick or in pain, all that disappears. That is when the climax of my day occurs."

"We should remember him with a smile," Kaiser said Saturday, adding a much-repeated quote of Borge's and title of his biography: "The smile is the shortest way between people."

He became an American citizen in 1948, but thought of himself as Danish. It was obvious from the numerous affectionate tributes and standing ovations at his 80th birthday concert in Copenhagen in 1989 that Danes felt the same way.

In the concert at Copenhagen's Tivoli gardens, Borge played variations on the theme of Happy Birthday to You in the styles of Mozart, Brahms, Wagner and Beethoven — all executed with such wit that the orchestra was convulsed with laughter that a woman performing a piccolo solo was unable to draw breath to play.

Borge is survived by five children, nine grandchildren and one great-grandchild. His second wife, Sarabel, died in September at the age of 83.

©2000 CBS Worldwide Inc. All Rights Reserved. This material may not be published, broadcast, rewritten, or redistributed. The Associated Press and Reuters Ltd. contributed to this report