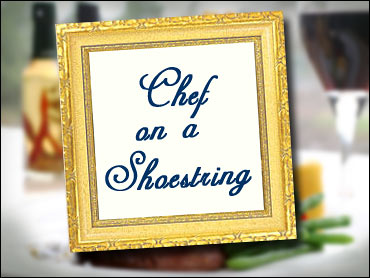 Chef Kerry Simon of the Simon Kitchen and Bar at the Hard Rock Cafe has brought a hip, new edge to the Las Vegas restaurant scene. As this week's "Chef on a Shoestring," Simon prepares a cozy dinner of comfort food for what will hopefully be one of the last bitterly cold weekends of the winter!

Kerry Simon is a celebrity chef whose latest restaurant will open this spring in Las Vegas. Simon at Palms Place at the new Palms Place Hotel, Condo & Spa will specialize in sushi, steak and seafood with more than 8,400 square feet of dining space. He's also the proprietor of the brand new Cat House at the Luxor hotel in Sin City. The dining room is arranged like the parlor of a 19th-century European bordello, with ornate wallpaper and beautiful chandeliers, and the menu features a more upscale French and European touch to American classics.

Kerry's fascination with cooking did not start right away. In his late teens he found himself saving for an electric guitar and landed a job a Little Caesars Pizza in Chicago. He went on to enroll in the CIA in New York. Early in his career, Simon sought out the mentorship of culinary master Louis Outier.

Chef Simon began a trend that renewed the popularity of chef's tables in kitchens throughout many fine restaurants in the United States. This critical response to Simon's special brand of culinary genius was noticed by Rolling Stone. In 1991, the magazine named him one of the top personalities of that year, and bestowed him with the unofficial title of "Rock 'n' Roll Chef."

Black Rice: Black rice is one of several black-colored heirloom plants producing rice variants such as Indonesian Black Rice, forbidden rice, or wild rice. High in nutritional value, forbidden rice is rich in iron. Unlike other black rice from Asia, it is not glutinous or rough. This grain is high in fiber and has a deep, nutty taste. Black forbidden rice is a deep black color and deep purple when cooked.

Escarole: This vegetable, which is related to endive, looks a bit like a head of lettuce but with curvy, tougher leaves. It has a milder flavor than endive.

Coat eggplant liberally on the scored side with olive oil and sprinkle with salt and pepper.
Lay out cut side up and roast in a 325° oven until soft and golden brown (about half an hour). Flip (to avoid burning) over and continue to roast for about another half-hour or until fully cooked and much of the water is removed. While eggplant is still warm but cool enough to handle, scoop out flesh and place in a large kitchen towel to wring out excess moisture. Puree in the food processor.

Toast pine nuts. When cooled, mix all ingredients except flour, eggs and the extra two cups of bread crumbs and season with salt and pepper to taste.

Form patties by rolling balls the size of a quarter and flattening slightly.

When patties are formed, bread with flour egg and bread crumb. Repeat the breading process so each cake is double breaded.

In a heavy bottomed sauté pan, fry in a quarter inch of oil until golden brown on both sides and serve with tomato sauce.

In a heavy bottomed sauce pot, over medium high heat, sweat garlic and shallots until very soft and translucent. Add tomato paste and stir to incorporate. Cook stirring constantly for one minute. Add canned tomatoes and stir to mix together. Simmer on low for about one hour or until sauce is reduced by one third. Finish with salt, chile flake and basil. Served hot or cold with eggplant cakes

Pre-heat oven to 400°. Season chicken liberally with salt and pepper. In a medium, hot, oven-safe sauté pan, place chicken pieces skin side down. Cook for about five minutes or until skin is golden. Do not turn over but place as-is into oven. Allow to cook for an additional 20 minutes or until thigh juices run clear.

Remove pan from oven, and bring it back to the stove top. Remove chicken from pan and allow to rest while you finish the pan sauce. Pour one cup of chicken stock into the pan over medium heat. Allow to simmer and reduce by two thirds. Add ¼ stick of butter and swirl to incorporate. Remove from heat and adjust seasoning with salt and pepper. Pour on chicken when ready to serve.

Thinly slice garlic and shallots. In a medium sized heavy bottomed sauce pot, pour about 1 tablespoon of olive oil. Over medium high heat sweat garlic and shallots until soft and caramelized. Add rice and stir to toast for 2 minutes. Cover with stock and allow to simmer for about 30 minutes or until all the liquid is absorbed. At this point the rice should be completely cooked. If not add a little water and allow to cook a little longer. Cooking time may vary depending on the level of heat.

When the rice is fully cooked, stir in one quarter stick of butter and 2 cups of chopped escarole. Adjust seasoning with salt and pepper. Serve on a platter family style with chicken and sauce.

In a clean stainless steal bowl, mix together sugar and flour and baking powder. Add butter and stir with a wooden spoon until creamy and fully incorporated. Whisk in milk and, egg and vanilla.

Whisk 5 tablespoons butter and granulated sugar until smooth and incorporated. Whisk in milk, vanilla and egg. Whisk in flour and baking powder.

In an 8-inch oven safe sauté pan melt brown sugar and remaining butter until smooth and melted. Add diced pineapple and sauté until heated through. Be sure to swirl the butter sugar mixture so it coats the sides of the pan as well. Add previously made batter. Place in oven uncovered for 25 minutes or until a toothpick inserted comes out clean. Allow 10 minutes to rest. Invert on to a serving plate, serve with vanilla ice cream and enjoy.