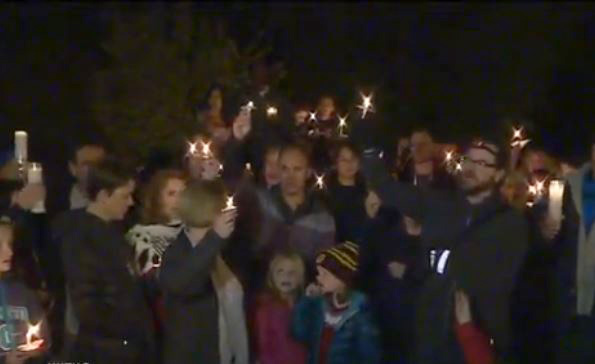 COLORADO SPRINGS, Colo. - The scene for many Colorado Springs residents on Saturday morning was surreal: a man in a green jacket carrying an assault rifle was calmly marching down the street near downtown shooting people.

Two women killed by the gunman were shot as they chatted on the porch of their residence for sober living, while a third victim was a bicyclist who begged for his life as the shooter wordlessly fired.

Authorities released few details about the shootings that happened in broad daylight, refusing to identify those killed or the suspect, who died in a gun battle with police. But a fuller picture of the three victims emerged from those who knew them and witnesses who described a terrifying scene.

Witnesses said the gunman first took aim at a young man riding a bicycle, shot him several times and left him face-down on the sidewalk. Police found him with his backpack still on.

The shooter then roamed the streets with a AR-15 rifle in one hand and a revolver in the other. About a half-mile away, he turned suddenly, shooting two residents on the porch of a home for women in recovery. He then continued down the block as police closed in, shooting out the window of a squad car before officers fired back, said Matthew Abshire.

Abshire told CBS affiliate KKTV in Colorado Springs: "I looked out my kitchen window and I saw a man in a green jacket firing an AR-15. ... [I] waited a few seconds, went out of my house, looked to my left and saw a man down the street, probably 50 feet. I started following him and I called the cops."

Later, Abshire said it appeared to be a totally random act.

"He walked calmly and collectedly," he said. "His demeanor was like he was having a stroll in the park."

Abshire rushed to help the women the gunman shot, using his shirt as a tourniquet, but it was too late.

Bullet holes were still visible in the home's siding on Sunday, and a pair of red roses lay on the bench where the women could often be found together.

"Those ladies were often on the porch, almost always they said good morning," said Benjamin Broadbent, lead minister of the First Congregational Church of Colorado Springs, who lives nearby. As dusk fell, he led a candlelight vigil for a group of more than 50 people, urging compassion, even for the family of the gunman.

Those who knew the women said they were working hard to improve their lives.

The shooting has shaken other women living in the home, said Adrieanna Waldridge, the roommate of one of the victims. She said her friend had been excelling at a new job and had looked forward to taking her two young children trick-or-treating.

"We were going to be each other's sober buddies," she said. "It feels like a part of me is missing."

Naomi Bettis, who lives across the street from where the bicyclist was slain, did not know him but laid a bouquet of flowers and note where he fell.

"My thoughts are with you. Praying for the family. I'm sorry for your loss."

Bettis said she saw the gunman, in a green jacket and cap, shoot the cyclist, who was coming down the block.

"His last words were 'Please God, no,'" said another neighbor, Teresa Willingham, who saw the man lying face down in the street, his mangled legs still intertwined in his bike. "He was just at the wrong place at the wrong time."