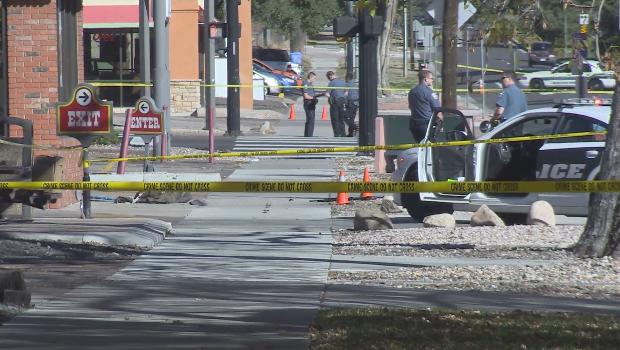 COLORADO SPRINGS, Colo. - At 8:45 a.m. on Saturday morning, police in Colorado Springs were called to North Prospect Street to reports of gunshots. They found a man, dead next to his bike, still wearing his backpack.

After the first shooting, the gunman took off running, and according to witnesses who talked to KKTV, he just began shooting at anyone in his way, hitting a few.

One of those witnesses, Matt Abshire, said: "I looked out my kitchen window and I saw a man in a green jacket firing an AR-15...waited a few seconds, went out of my house, looked to my left and saw a man down the street, probably 50 feet. I started following him and I called the cops."

Abshire said he tailed the suspect while calling 911.

"Still following him, he's heading left on Platte towards Palmer High School...probably a hundred yards past El Paso Street he stops, turns to his left, fires four shots, shoots two ladies, one in the jaw, one in the chest if I'm not mistaken," Abshire said.

Abshire said one of the victims was dead by the time he got to her, and that police encountered the gunman moments later outside a Wendy's.

"They encountered him at the corner of Platte and Wahsatch, where the suspect opened fire on the officers and the officers returned fire," El Paso County Sheriff's Office spokesperson Jacqueline Kirby told KKTV. Because of a new law requiring outside agencies to investigate law enforcement-involved shootings, EPSO is investigating the Wendy's shooting.

"Me and my son were at the 7-Eleven using the ATM...as soon as I walked outside I heard six gunshots up the street. ... We see the cop cars swarm in. I saw the guy with the gun just walking with the gun in his hand. ... Just calm, standing there with a gun in his hand," witness Alisha Jaynes told 11 News.

Aaron Nicks told KKTV he also witnessed the shooting from his patio with his dog.

"They yelled, 'Put the gun down,' and he turned around, and that's when they shot at him a good 20 times. ... There was a lot of gunfire. He was running across the street right here [points at Wahsatch] and they pretty much shot him down," Nicks said.

"What I saw was he kind of, like, spun around and [police] yelled, 'Drop it,' and he kind of [gestures as though he's holding a gun] went to aim and that's when they shot him down," Nicks said.

Nicks said the suspect was darting between fast-food restaurants on Wahsatch as he tried to escape officers.

"He was running across from Taco Bell through here to the Wendy's, and that's where they shot him."