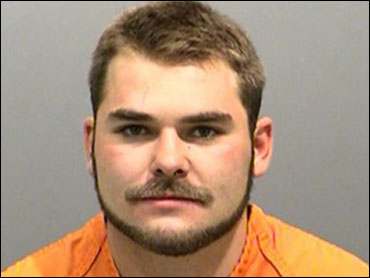 Police arrested a man who was allegedly naked when he broke into two homes in Golden, Colo. early Monday morning

Clinton March, 24, faces charges of burglary, theft and indecent exposure for his odd behavior at the homes,

Ruth, a resident at the first home (who asked that CBS4 not use her last name), said she heard her dog barking and saw her motion light come on. Ignoring the impulse to call police, she went outside and saw the suspect standing naked just inside a different door of her home.

Ruth said she regrets she didn't immediately call 911 when she heard the barking.

"He was leaning over this (bureau) with a sheet tucked between his legs," she said. "He was within a foot and 1/2 to 2 feet of me when I yelled at my husband and he ran that way."

Ruth said the suspect then ran to her neighbor's home.

"I feel very violated even though the man did not touch me," Ruth said. "If he hadn't have heard the dogs, who knows what he would have done."

The neighbor, Dolores (who also wished to only provide a first name) said she was sleeping when the man came into one of her rooms and started rifling through her things. He then apparently put on her underwear, a nightgown, stockings and a scarf and went into her bathroom.

After she got up Dolores came face-to-face with the man, who she initially thought might be her grandson.

"He was laying across this tub like a stiff board with his head over there (at the tub) and his legs sticking out there (on the bathroom floor)," she said.

Local Video from CBS13 in Sacramento
Dolores said she felt like she "had a guardian angel" because the suspect then got up and walked right out of her home. Jefferson County deputies arrested him outside the house wearing the clothes. He also apparently took a child's toy from one of the houses.

Officers said they think March may have broken into other homes and said they haven't recovered his clothes.

"This is scary behavior. Alarming behavior. And it's certainly the kind of behavior that eventually leads to greater acts of violence," said Jacki Kelley with the Jefferson County Sheriff's Department.

March was arrested in 2006 for indecent exposure and trespassing. He's being held on a $10,000 bond.

Jefferson County police warned residents in light of the incident to be sure to lock windows and doors to avoid criminals who might be trying to target their home.