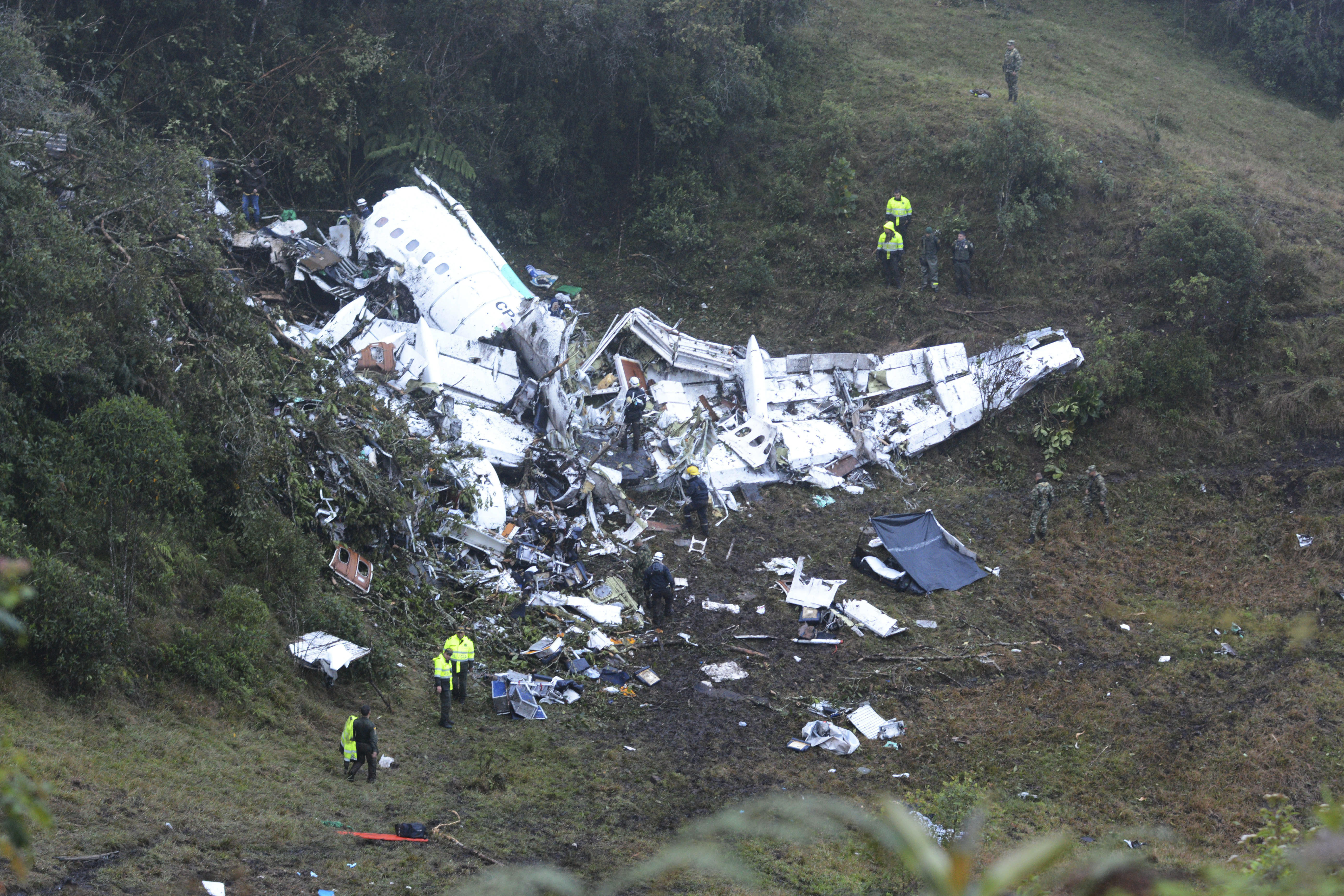 LA UNION, Colombia -- A chartered plane carrying a Brazilian first division soccer team to the biggest match of its history crashed into a Colombian hillside and broke into pieces, killing 71 people, Colombian officials said Tuesday. Only six people are believed to have survived the crash.

Officials Tuesday lowered the initial death toll by four, AFP reported. The civil aviation authority had initially given a death toll of 75, but it later emerged that four people on the passenger manifest had not in fact boarded the plane.

Colombia’s civil aviation agency says at least three Chapecoence players, two plane crew members and one journalist survived the crash. Reports about the number of survivors have varied overnight because of confusion amid the emergency.

Twenty journalists are among the dead, officials said Tuesday.

Colombian aviation authorities said 21 of the 77 people aboard the charter flight were journalists covering the Chapecoense team from southern Brazil and its upcoming South American Cup match in Medellin, Colombia.

One journalist was among the six survivors: Rafael Valmorbida of Radio Oeste Capital, a station in the Brazilian city of Chapeco, where the team is based.

“We lost more than just a team,” said the station’s website. “We lost friends, partners, colleagues and family members.”

The station called for prayers for Valmorbida’s recovery, and for three other station journalists who died.

The journalists, all men, included cameramen, photographers, commentators and reporters from radio stations in Brazil as well as larger media outlets such as Fox and Globo, a large Brazilian conglomerate.

Colombia’s civil aeronautics agency says it has found the two flight recorders from the airplane.

The agency says in a Twitter message that both of the recorders have been recovered “in perfect condition.” That could help determine what caused the British Aerospace 146 to crash.

The British Aerospace 146 short-haul plane, operated by a charter airline with roots in Venezuela, declared an emergency and lost radar contact just before 10 p.m. Monday (0300 GMT Tuesday) because of an electrical failure, aviation authorities said.

The team, from southern Brazil and which had started its journey in Sao Paulo, was scheduled to play Wednesday in the first of a two-game Copa Sudamericana final against Atletico Nacional of Medellin -- the continent’s second-most-important championship.

“What was supposed to be a celebration has turned into a tragedy,” Medellin Mayor Federico Gutierrez said from the search and rescue command center.

The club said in a brief statement on its Facebook page that “may God accompany our athletes, officials, journalists and other guests traveling with our delegation.”

One of the players, goalkeeper Danilo, who was among those initially rescued and brought alive to a hospital, later died of his injuries, a spokesman for the Brazilian soccer club confirmed. Team spokesman Andrei Copetti announced the death to The Associated Press, adding that another goalkeeper was reported to be among the remaining survivors.

Colombian aviation authorities said 21 journalists were among the 81 passengers. Only one of the journalists is listed as surviving.

The journalists came from several organizations, including Fox and Globo, a large Brazilian conglomerate, and a handful of FM and AM radio stations in South America.

The Argentine forward wasn’t able to play in the scheduled match in Colombia, so he wasn’t on the team plane that crashed Monday night in Colombia, killing most of those aboard. He told Argentina’s La Red radio that “I was saved because I got injured.”

“I feel profound sadness,” he said. “The only thing I can ask is prayers for the companions who were on the flight.”

The 28-year-old has played for Spain’s Villarreal, Penarol of Uruguay and Brazilian clubs Coritiba, Ponte Preta, Cruzeiro and Fluminense.

Brazil as well as South America’s soccer federation extended its condolences to the entire Chapecoense community and said its president, Luis Dominguez, was on his way to Medellin. All soccer activities were suspended until further notice, the organization said in a statement.

Expressions of grief poured in from all over the soccer world. In addition to South America’s federation canceling all scheduled matches in a show of solidarity, Real Madrid, FC Barcelona and other professional squads with many South American players interrupted training for moments of silence and soccer legends the world over expressed grief on social media.

Elkin Ospina, mayor of La Ceja, near where the crash took place, said rescuers working through the night had been heartened after pulling three passengers alive from the wreckage.

Authorities and rescuers were immediately activated but an air force helicopter had to turn back because of low visibility. Heavy rainfall complicated the nighttime search, and authorities urged journalists to stay off the roads so ambulances and other rescuers could reach the site.

Images broadcast on local television showed three male passengers arriving to a local hospital in ambulances on stretchers and covered in blankets connected to an IV. All were apparently alive and one of them was reportedly a Chapecoense defender named Alan Ruschel. Part of the plane’s heavily damaged fuselage could also be seen in images broadcast by Colombian media.

The aircraft, which had departed from Santa Cruz, Bolivia, was transporting the Chapecoense soccer team to Medellin’s Jose Maria Cordova airport.

Bolivian authorities said the plane had arrived earlier in the day from the city of Cochabamba and picked up the Brazilian team at Santa Cruz’s Viru Viru airport. They said the plane underwent an inspection before departing for Colombia and reported no problems.

The airline had been used in the past to shuttle several Bolivian teams as well as Medellin’s Atletico Nacional for matches around South America.

The plane was carrying 72 passengers and nine crew members, aviation authorities said in a statement. Local radio said the same aircraft transported Argentina’s national squad for a match earlier this month in Brazil, and previously had transported Venezuela’s national team.

British Aerospace, which is now known as BAE Systems, says that the first 146-model plane took off in 1981 and that just under 400 - including the successor Avro RJ - were built in total in the U.K. through 2003. It says around 220 of are still in service in a variety of roles, including aerial firefighting and overnight freight services.

A video published on the team’s Facebook page showed the team readying for the flight earlier Monday in Sao Paulo’s Guarulhos international airport.

The team, from the small city of Chapeco, was in the middle of a fairy tale season. It joined Brazil’s first division in 2014 for the first time since the 1970s and made it last week to the Copa Sudamericana finals - the equivalent of the UEFA Europa League tournament - after defeating two of Argentina’s fiercest squads, San Lorenzo and Independiente, as well as Colombia’s Junior.

The team is so modest that its 22,000-seat arena was ruled by tournament organizers too small to host the final match, which was instead moved to a stadium 300 miles to the north in the city of Curitiba.

“Chapecoense was the biggest source of happiness in the town,” the club’s vice-president, Ivan Tozzo, told Brazil’s SporTV. “Many in the town are crying.”

Soccer stars from across the globe sent condolences over social media Tuesday morning to victims of the tragedy.