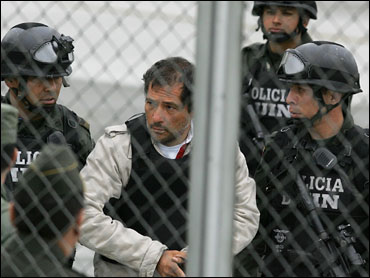 Colombia extradited reputed cocaine kingpin Miguel Angel Mejia on Wednesday, making him the 16th paramilitary warlord dispatched to the United States on drug trafficking charges in less than a year.

The 49-year-old Mejia was an anomaly among far-right militia bosses. After initially demobilizing in a peace pact with the government, he returned to being a fugitive and authorities say he ran a major drug gang.

His extradition Wednesday aboard a DEA Super King turboprop plane was confirmed by Col. German Jaimes, deputy director of Colombia's judicial police, who said Mejia was bound for Washington, D.C. News media were not invited to witness the departure.

Police killed Mejia's twin brother and alleged crime partner Victor in an April 2008 raid. Mejia himself was captured the next month in a false compartment in a truck cab. The United States had offered $5 million rewards for the capture of either Mejia, who were known as the twins, "Los Mellizos" in Spanish.

Miguel Angel was first indicted in the United States in 2000 and is to be tried in District of Columbia federal court.

He and brother began trafficking in the 1990s and shipped 4 to 10 metric tons of cocaine to the United States and Europe monthly, according to Col. Cesar Pinzon, chief of Colombia's judicial police.

Mejia's lawyer, Angelica Maria Martinez, told The Associated Press on Wednesday that her client faced no charges in Colombia but nevertheless confessed to leading a far-right militia that she said was responsible for the massacre of 10 people in 2004 in a town called Flor Amarillo.

Prosecutors say they are investigating Mejia's involvement in many more killings.

Martinez said Mejia was hoping that in exchange for confessing to his crimes and handing over ill-gotten gains he might negotiate a reduced sentence in the United States.

U.S. prosecutors have shown themselves ill-disposed to such deals, however, seeking prison terms of well over 20 years for other Colombian paramilitary warlords extradited there on drug trafficking charges.

Since taking office in 2002, President Alvaro Uribe has extradited more than 800 criminal suspects to the United States to stand trial, the vast majority on drug trafficking charges.