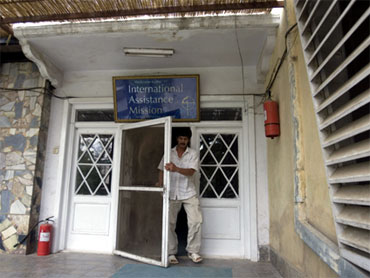 A 51-year-old Colorado dentist was among 10 members of a medical team gunned down in Afghanistan earlier this week, a nonprofit dental group said Sunday.

"This just breaks my heart," she said.

Grams was killed Thursday along with five other Americans on a medical trip, Shaw said. The Taliban has claimed credit for the attack, saying the workers were trying to convert Muslims to Christianity.

The bodies of the assassinated medical team - which included six Americans, two Afghans, one German and a Briton - were returned to Kabul aboard helicopters Sunday. The families of the six Americans were formally notified of their deaths after U.S. officials confirmed their identities, said Caitlin Hayden, a spokeswoman for the embassy.

Names of most of the foreigners have not been released pending formal identification.

Officials have said the victims included team leader Tom Little, an optometrist from Delmar, New York, who had lived in Afghanistan for about 30 years, and Dr. Karen Woo, who gave up a job in a private clinic in London to do humanitarian work in Afghanistan.

Shaw described Grams Sunday as "a sweetie pie" who was quiet and shy but opened up around children. She said the group got word of his death Saturday.

The team was attacked while returning to Kabul after a two-week mission in the remote Parun valley of Nuristan province about 160 miles north of Kabul. The bullet-riddled bodies were found Friday near three four-wheeled drive vehicles in a wooded area just off the main road through a narrow valley in the Kuran Wa Munjan district of Badakhshan.

The gunmen spared an Afghan driver who told police he recited verses from the Islamic holy book the Quran as he begged for his life.