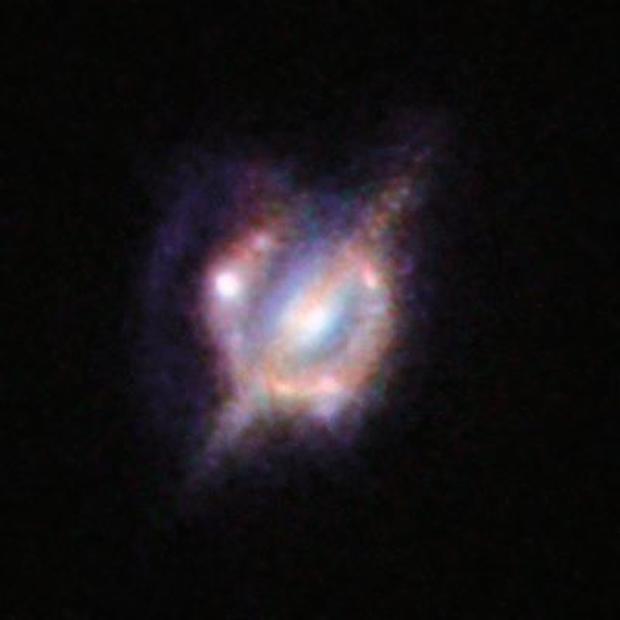 From the far reaches of space, astronomers brought two colliding galaxies into sharp focus by patching together images from several powerful telescopes. That, and the luck of a rare "galactic lens."

"While astronomers are often limited by the power of their telescopes, in some cases our ability to see detail is hugely boosted by natural lenses created by the Universe," the lead researcher, Hugo Messias, explained in a press release.

A giant, heavy object bends light from objects behind it due to its strong gravity - an effect called gravitational lensing. Astronomers can study objects through such a cosmic magnifying glass that would otherwise be invisible. But for a gravitational lens to work, the foreground lensing object - in this case a galaxy - and the one beyond it need to be precisely aligned.

That's what happened in this rare instance.

"These chance alignments are quite rare and tend to be hard to identify," said Messias, of the Universidad de Concepción in Chile and the Universidade de Lisboa in Portugal. But by combining the images of telescopes that use different wavelengths of light "we can find these cases much more efficiently."

The colliding galaxies, officially designated HATLAS J142935.3-002836 (or H1429-0028 for short) are among the brightest gravitationally lensed objects ever observed, the researchers say.

The astronomers released videos illustrating their findings (seen above). First the viewer zooms through space to locate the colliding and merging galaxies, and then we see how gravitational lensing magnifies and brightens distant objects.