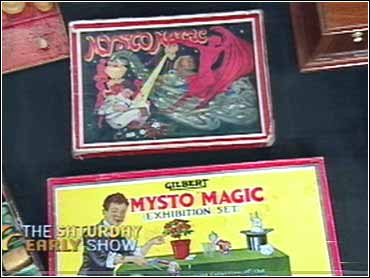 From Houdini freeing himself from a straitjacket to the recent spectacle of David Blaine being frozen in a block of ice, there has always been a public fascination with magic. And The Saturday Early Show's Collectibles Expert Tony Hyman explains that fascination has carried over into the world of antiques.

Magicians and illusionists have been around as long as civilization. Today collectors seek the tools of their trade along with antique magic literature and other related items.

Posters advertising performances from the late 19th and early 20th centuries can be quite valuable. Above all, Houdini posters are the most prized. His posters can bring $25,000 and more.

Other desirable posters feature Kellar, an American-born magician, and Thurston, considered by many to be the all-time greatest magician.


There is little collector interest in large devices designed to, say, cut women in half, perform levitations, make tigers disappear and the like. They are difficult to collect and use. Unless the stunt was practiced by someone famous, there are only a few highly specialized buyers who may be interested.

Parlor magic apparatuses, such as small devices used for home and stage tricks from the 19th century and early 20th, are popular with collectors. Prices can range from $3,500 to more than $10,000 for highly crafted pieces.

Books on magic are good items for novice collectors. They vary in price from a few dollars to much higher; but most go for less than $100. Reginald Scott's Discovery of Witchcraft, first published in the late 1500s, is considered the first book exposing the secrets behind magic tricks and will bring $15,000 and up. Also sought after are editions of Witchcraft with illustrations published in the 17th and 18th centuries.

Paper collectibles and ephemera such as handbills, business cards, letterheads, autographed photos and magician's tokens, can fetch from $25 to hundreds for rare items. A token made for Andersen, a performer from the 1600s, will bring $5,000.

For more information, contact magic historian, collector and dealer Mario Carrandi. He can be reached by email at info@carrandimagic.com. You can also visit his Web site at www.carrandimagic.com.