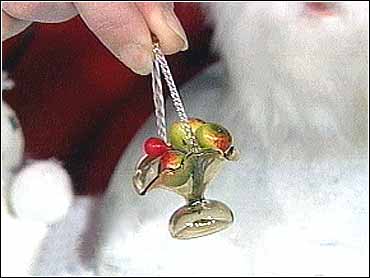 If you're hunting for antique this holiday season, The Saturday Early Show's Collectibles Expert Tony Hyman says there may be one hanging from your Christmas tree.

There are three types of ornaments popular with collectors: glass, Dresden (made of paper) and cotton.

Collectible glass Christmas ornaments made to hang on trees date back to the second half of the 19th century. Most were made in Germany and Austria and the surrounding area. Frank W. Woolworth, the dime-store king, was in large measure responsible for bringing them to the United States in the 1880s. The ornaments were hugely popular and profitable, and soon several retail chains carried them. Sears sold German "figurals" for 6 cents each at the turn of the century.

They were blown into detailed shapes such as stockings and images of Santa Claus. The insides were then coated with metallic paints to give them a shiny appearance. Unique ornaments can be worth more than $1,000 today.

Japanese glass ornaments were manufactured in the 1920s but weren't of the same quality and are therefore not as valuable to collectors.

Dresden ornaments, named for one of the cities in the German region where they were made, were pressed from sheets of paper and molded into three-dimensional designs.

The period between the late 19th century through the 1910s was the heyday for these decorations but evidence exists they go back to the early 1800s. Values can range into the many hundreds of dollars.

Spun-cotton ornaments were also made in Germany - mostly around the turn of the century. They were made by spinning cotton and cellulose together. Food shapes are the most common while shapes of people and animals are the most valuable to collectors. Their values range from $100 to around $300.