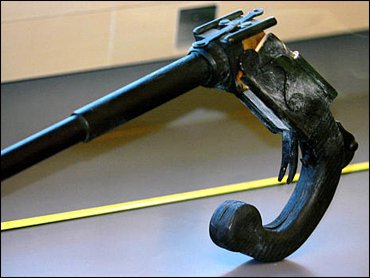 Investigators released photographs Thursday of a cane-shaped, likely homemade firearm found in the car of a pizza deliveryman who died when a bomb locked around his neck exploded after he robbed a bank.

Federal agents investigating the death of Brian Wells on Aug. 28 outside Erie also issued a $50,000 reward for information leading to anyone responsible for the robbery and Wells' death.

Before he died, the 46-year-old deliveryman told authorities he had been forced to rob the bank by someone who locked the collar around his neck. Police who surrounded Wells after he robbed the bank were waiting for a bomb squad when the device detonated.

FBI Agent Bob Rudge said the cane-shaped weapon fired shotgun shells and appeared to be homemade. Investigators hope someone will recognize the gun, which is made of wood and metal.

"We know that Mr. Wells was instructed to take the cane inside (the bank) to commit the robbery," Rudge said. He did not say how the FBI knows that and he refused to say whether the weapon had been fired.

Rudge said behavioral specialists at FBI headquarters in Quantico, Va., determined that the person who made the weapon was likely patient, mature and deceptive.

"This may not be the only cane-gun the individual has manufactured," he said.

In the weeks since Wells' death, authorities also have released details from an extensive note in Wells' possession. The note directed him to four locations after robbing the bank. Investigators also have released photographs of the three-ringed, locked metal collar.

Two men were seen running in a suspicious manner not far from the scene of the bizarre bank robbery, Rudge said Monday.

On Monday, the FBI released sketches of the two men, saying it was not known if they had anything to do with the case.

Investigators have said that they have not ruled out that Wells could have been a willing participant in the crime.

"Brian was definitely a victim," his aunt, Janneth McDonald, said last Friday on CBS News' The Early Show. "There is no way such a kind, gentle, thoughtful and wonderful boy could do that. He had too much to live for and his family was too meaningful to him."

According to manufacturers in the Erie area, the person who fashioned the collar could have done so with little more than limited experience in metalworking or welding.

"It could have been just a guy fooling around with metal-working," said Bob Heinlein, president and owner of H&H Machined Products Inc. in Erie. Heinlein said the collar could have been welded from pieces of metal and didn't require much expertise to put together.

"I don't think he would even have thought about it," she told Early Show co-anchor Harry Smith.

Wells had answered a delivery call to what turned out to be a remote, wooded area a short time before he went to the bank, according to authorities.