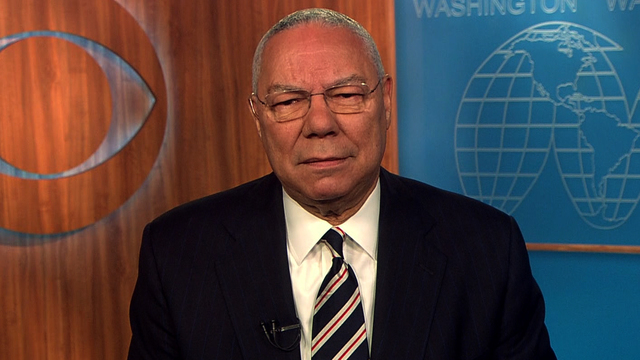 The day Nelson Mandela raised his right hand and stepped into history -- being inaugurated as South Africa's first black president -- Gen. Colin Powell was there.

As the world looks back on the life of the South African leader, who died Thursday at the age of 95, the former U.S. Secretary of State took a moment to reflect on the man and that day, in an interview Friday with the co-hosts of "CBS This Morning."

"'l'll never forget it. It was a remarkable day," said Powell. "We waited and waited and waited, until finally the announcer said 'ladies and gentlemen, please welcome the new president of the new republic of South Africa, Nelson Mandela'."

He was led to the stage by four South African military commanders, all white men -- a gesture Powell said was very moving. "That truly showed the transfer of power. That they were accepting him as their commander in chief, black, white or otherwise."

During his historic speech, Mandela recognized his jailers, and he asked the people of South Africa not to lash out -- to move forward peacefully. "He not only freed black South Africans, but he freed white South Africans from burden of apartheid," Powell said.

Powell spent time with Mandela over the years. He described him as a "remarkable individual" who taught him many life lessons. "Humility. Have a purpose. Have a vision. Be prepared to sacrifice. Be prepared to listen to the other side." And, said Powell, "always be ready to change your mind, but never abandon your principals."

"I always see him as the George Washington, the Abraham Lincoln and the Martin Luther King of the people of South Africa," Powell said. "He may be gone physically, but his spirit will live on forever in South Africa and throughout the world."