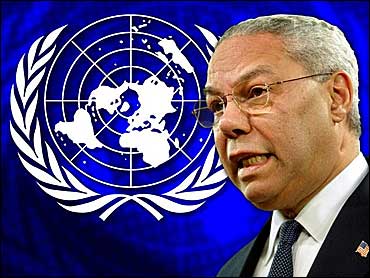 Powell drafted CIA Director George Tenet to appear with him at Wednesday's Security Council meeting for what promises to be a pivotal moment in the confrontation with Iraq. Tenet is on record as saying Iraq has "provided training to al Qaeda members in the areas of poisons and gases," and it is the possibility that Saddam Hussein would give Osama bin Laden a weapon of mass destruction which the administration says makes Iraq so dangerous.

In an effort to convince the Security Council that Iraq is hiding chemical and biological weapons, Powell will display diagrams of mobile biological weapons vans based on eyewitness descriptions from Iraqi defectors.

He will also release transcripts of intercepted conversations between specific Iraqi officials talking in unmistakable terms about hiding materials from the U.N. weapons inspectors.

He said that while "I don't want to overstate it, for the obvious reason," Powell would also show "some intersections with various and sundry terrorist groups and that is our real fear with Iraq."

But CBS News National Security Correspondent David Martin reports that none of what Powell plans to unveil Wednesday will touch on the most pressing threat – new intelligence picked up within the past few weeks that al Qaeda is preparing to conduct more terrorist attacks against the U.S. with the specific intent of causing mass casualties.

Intelligence analysts believe these attacks would be intended to take advantage of America's seeming preoccupation with preparing for a war against Iraq and the rising tide of anti-Americanism those preparations are causing.

Although there have been recent arrests of al Qaeda operatives in Europe, intelligence officials do not believe they have broken up the plots which appear to be targeted against American interests both overseas and in the U.S. Officials say there is no specific evidence al Qaeda plans to use chemical or biological weapons, and that another attack could take the form of the nightclub bombing in Bali or the attempt to shoot down an Israeli airliner in Kenya.

Whatever al Qaeda is planning, the intelligence that something big is in the works has prompted both the FBI and the new Department of Homeland Security to begin discussions on issuing a nationwide alert.

Saddam, meanwhile, in an interview broadcast Tuesday, denied his government has a relationship with al Qaeda or has weapons of mass destruction. He said it would be impossible to hide such arms.

In Iraq, U.N. arms investigators Tuesday found another empty chemical warhead, the 17th discovered since mid-January. The Iraqis have said the empty munitions found earlier were overlooked leftovers from the 1980s.

Before and after Powell's speech Wednesday to the Security Council, he intends to meet with foreign ministers and ambassadors from most of the other members.

Besides Powell's presentation on Wednesday, all 14 other members — and Iraqi Ambassador Mohammed Al-Douri — are expected to make statements to the council in what could be a critical test of sentiment for using force to disarm Iraq.

Powell hopes his evidence will persuade the council that Iraq has caches of chemical and biological weapons, nascent nuclear weapons and long-range missile programs and ties to terror groups.

President Bush and his top national security officials have said repeatedly that Iraq will be forcibly disarmed if it does not comply with U.N. resolutions demanding that it reveal and give up weapons of mass destruction.

Powell also is expected to accuse Iraq of harassing scientists and others who have useful information and to criticize Iraq for denying the inspectors permission for flights by U-2 reconnaissance planes.

The emphasis on links to terror groups is designed to draw support from France, which views al Qaeda as more dangerous than Iraq.

But British Prime Minister Tony Blair, who has supported the Bush administration on using force as a last resort to disarm Iraq, failed again Tuesday to persuade a reluctant France to join a U.S.-led coalition.

President Jacques Chirac, during talks with Blair in France, said he remains adamantly opposed to a war without giving U.N. inspectors more time to search for outlawed weapons.

Also on Tuesday, Mr. Bush talked by telephone with Russian President Vladimir Putin for about 15 minutes.

Both France and Russia have veto power in the Security Council.