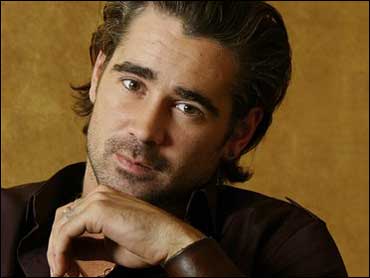 Actor Colin Farrell is suing a woman for allegedly trying to distribute and profit from a sex tape he says the two recorded with the agreement they would never make it public.

The lawsuit filed Monday in Superior Court seeks general and compensatory damages as well as a temporary restraining order and injunction prohibiting the sale and exploitation of the videotape.

Farrell, 29, accuses Nicole Narain of trying to distribute the tape through an intermediary. The two had an intimate relationship 2 1/2 years ago and both agreed that the 15-minute tape that shows the couple having sex would be jointly owned by them and would remain private, according to the suit.

Narain, 31, could not be reached for comment. A call to a phone number listed for her revealed the number had been disconnected.

A message left for Farrell's attorney was not immediately returned Monday.

The lawsuit also accused the woman of working with the owner of an Internet pornography business and contacting the news media about the tape.

"Defendants' outrageous attempt to capitalize on the celebrity of plaintiff Colin Farrell ... through their unauthorized commercial exploitation of the highly private and confidential videotape exceeds all bounds of common human decency," the lawsuit states.

The lawsuit also said the release of the videotape would irreparably harm Farrell's reputation and career.

Farrell, who has starred in "S.W.A.T," "Alexander" and is slated to appear in "The New World" and "Miami Vice," has been named one of the sexiest men alive by People magazine and has a son with model Kim Bordenave.