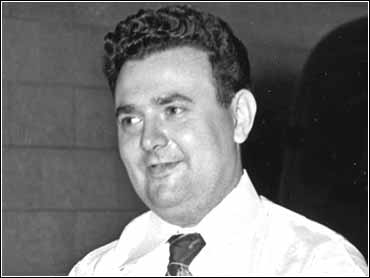 Nearly 50 years after convicted Soviet spy Ethel Rosenberg was executed, her younger brother has admitted that he lied under oath to save himself

"As a spy who turned his family in ... I don't care," David Greenglass - who now lives under an assumed name - says in a television interview to be broadcast Wednesday. "I sleep very well."

Greenglass admits that he too gave atomic secrets to Moscow. He says his sister was "stupid" for not confessing and saving her own life.

"I would not sacrifice my wife and my children for my sister," he said.

The admission sheds new light on the Rosenberg case, one of the most infamous events of the Cold War. Julius and Ethel Rosenberg were executed in Sing Sing prison in June 1953, two years after a sensational trial on charges of conspiring to steal U.S. atomic secrets for the Soviet Union.

They were the only people ever executed in the United States for Cold War espionage, and their conviction helped give fuel to Sen. Joseph McCarthy's communist-hunting crusade.

Greenglass, now 79, makes the disclosure of false testimony in "The Brother," a new book by veteran New York Times editor Sam Roberts, and in a taped interview to be broadcast Wednesday on CBS 60 Minutes II. 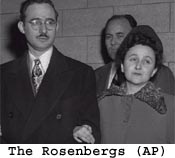 (AP)
When the Rosenbergs came to trial, Greenglass was also under indictment and worried that he and his wife, Ruth, would be convicted. He says Roy Cohn, an assistant prosecutor and later aide to McCarthy, encouraged him to lie. He was ultimately sentenced to 15 years and was released from prison in 1960.

In court, Greenglass delivered what would be the most incriminating testimony against Ethel Rosenberg - that she transcribed his spy notes destined for Moscow on a portable Remington typewriter. His wife corroborated his testimony.

But now, Greenglass tells author Roberts that he based his account entirely on his wife's recollection, not on his own. In the TV interview, he says, "I don't know who typed it, frankly, and to this day I can't remember that the typing took place. I had no memory of that at all - none whatsoever."

Roberts writes in his book, "Handwritten or typed, the notes contained little or nothing that was new. But from the prosecution's perspective, the Remington was as good as a smoking gun in Ethel Rosenberg's hands."

In the TV interview, Greenglass is asked why the Rosenbergs went to their deaths rather than admit espionage.

"One word - stupidity," Greenglass replies. Asked whether that makes Ethel responsible for her own death, he says, "Yeah."

Greenglass admits he is sometimes haunted by the Rosenberg case, but adds, "My wife says, 'Look, we're still alive.'"

Should he ever encounter the pair's two sons, Greenglass says, he would tell them he was "sorry that your parents are dead," but would not apologize for his part in their execution.

"I had no idea they would give them the death sentence, he told CBS.

In the book, subtitled "The Untold Story of Atomic Spy David Greenglass and How He Sent His Sister Ethel Rosenberg to the Electric Chair," Greenglass admits to further perjury in court and before a congressional committee - all aimed at gaining leniency for himself and keeping his wife out of prison.

The Rosenberg case became a political cause celebre with anti-Semitic overtones. While some historians say evidence against Ethel Rosenberg was weak compared with that against her husband, the pair's refusal to admit spying for Moscow added to public fears of a nuclear showdown with the Soviets.

"This was a time when people were terrified," Roberts said. "There was no way the Russians could have obtained the atomic bomb without stealing it from us."

Roberts said the late William Rogers, a deputy U.S. attorney general in 1951 and later President Richard M. Nixon's secretary of state, told him the government had expected Ethel Rosenberg to save herself by providing incriminating evidence against Julius.

But in the end, "she called our bluff," Rogers said.

Some tidbits of Cold War espionage lore related by Roberts are almost comic. According to Roberts, Greenglass admitted sleeping through the first A-bomb test, using atomic implosion technology to make artificial diamonds, and being picked up while hitchhiking by Lt. Gen. Leslie Groves, head of the top-secret Manhattan Project that developed the atomic bomb.