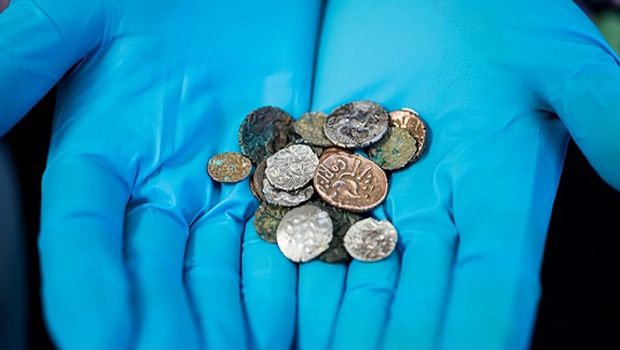 Digging through a cave in central Britain, archaeologists uncovered 26 ancient gold and silver coins belonging to the Corieltauvi tribe, a group of people that lived in Britain before the Roman conquest.

Archaeologists previously found collections of coins like these in other parts of Britain, but this is the first time they have ever been discovered buried in a cave. The discovery of the coins was a surprise, because they were found at a site called Reynard's Kitchen Cave, which is located outside the Corieltauvi's usual turf.

"It might be that we have a member of the tribe living beyond the boundary that is more usually associated with the territory," Rachael Hall, an archaeologist at the National Trust who led the excavation, told Live Science in an email. [The 7 Most Mysterious Archaeological Discoveries on Earth]

Back in 2000, a group of almost 5,000 Corieltauvi coins were discovered in Leicestershire. This more recent find at Reynard's Kitchen Cave might be additional evidence that members of the tribe once hoarded coins. Hall and the team speculate that the coins were hidden to ensure they weren't stolen, and whoever buried them may have planned on returning to the site to dig the coins up again.

The discovery included 20 Iron Age coins, three Roman coins and three coins from much later eras, according to a treasury report prepared by Ian Leins, curator of Iron Age and Roman coins at the British Museum. While the coins are not all from the same time period, Hall and the team of archaeologists said it's common to find collections of coins from different times, in the same way that, for example, U.S. coins from earlier decades are still circulating among newer coins.

Archaeologists are still unsure how Iron Age coins were used, but it is unlikely they were used as money to purchase items. They were more likely used as a means for storing wealth, given as gifts or offered as sacrifice. The three Roman coins discovered predate the Roman invasion, so archaeologists believe the coins may have been given as gifts.

A climber seeking shelter in the cave first discovered four of the coins, which prompted a full-scale excavation by the National Trust and Operation Nightingale, a group that helps injured military members recuperate by having them perform field archaeology.

The monetary value today of the coins discovered is around two thousand pounds (about $3,400 USD). The collection of coins officially qualifies as "treasure" under the United Kingdom's 1996 Treasure Act, which means it is valuable enough that it needs to be reported to authorities and offered up to museums.

Earlier excavation of Reynard's Kitchen Cave revealed animal bones and pieces of pottery. The coins will be put on display later this year at the Buxton Museum in Derbyshire.