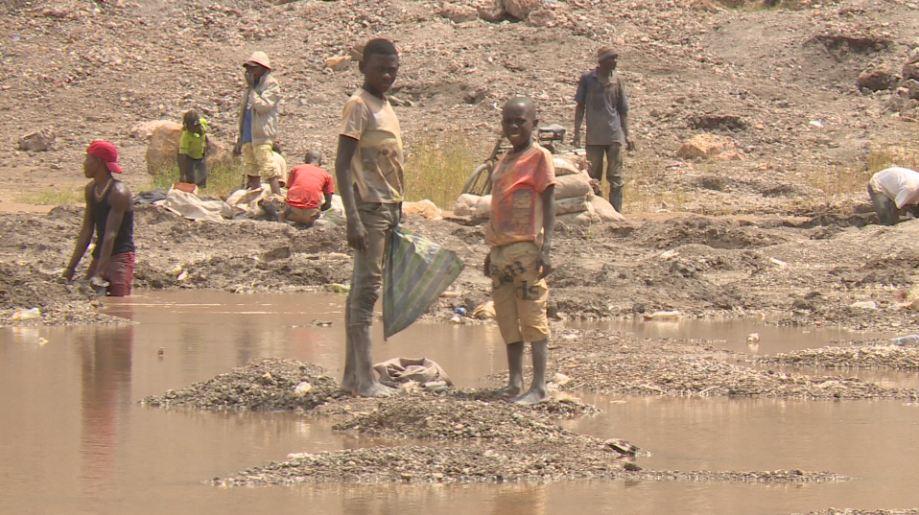 A CBS News investigation has found child labor being used in the dangerous mining of cobalt in the Democratic Republic of Congo. The mineral cobalt is used in virtually all batteries in common devices, including cellphones, laptops and even electric vehicles.

A report by Amnesty International first revealed that cobalt mined by children was ending up in products from several companies, including Apple, Microsoft, Tesla and Samsung.

CBS News traveled to the DRC to follow the complex supply chain. As CBS News correspondent Debora Patta reports, it's been two years since that damning Amnesty report was published, but the DRC is a country embattled in conflict, and it is difficult and sometimes dangerous to report from there.

On a recent trip to the southern part of the country, CBS News found what looked like the Wild West. There were children digging in trenches and laboring in lakes -- hunting for treasure in a playground from hell.

The work is hard enough for an adult man, but it is unthinkable for a child. Yet tens of thousands of Congolese kids are involved in every stage of mining for cobalt. The latest research by the United Nations Children's Fund (UNICEF) estimates 40,000 children are working in DRC mines.

More than half of the world's supply of cobalt comes from the DRC, and 20 percent of that is mined by hand, according to Darton Commodities Ltd., a London-based research company that specializes in cobalt.

Patta and her team traveled along collapsing dirt roads and saw children everywhere, digging for cobalt among abandoned open pit mines. It was clear that security officials in charge there -- only some of them in uniforms -- have something to hide.

There's such sensitivity around cobalt mining in the DRC that every few hundred feet the CBS News team was stopped, with security personnel requesting letters and documentation, even though we had official permission to be there.

But for the Chinese middlemen who buy the cobalt, there were no such constraints; they have free access.

In the mines, women and children help with the so-called artisanal mining, but don't be fooled -- it is no quaint cottage industry. At barely 10 years old, children lug heavy sacks of cobalt to be washed in rivers. From as early as four, they can pick it out of a pile.

Even those too young to work -- dust-covered infants clinging to their mothers and playing on the dirty ground -- spend much of the day breathing in toxic fumes.

Officials deny there's child labor, but it was plain to see. Whenever a camera or security person or policeman appears, the children are chased away quickly.

Ziki Swaze, 11, agreed to meet Patta outside the mine to discuss the work.

"My parents are dead," he explained when asked why he wasn't at school. He lives with his grandmother, and provides their primary income from the cobalt mines.

We asked a wide range of companies whether child-mined cobalt is being used in their products. All of the firms acknowledged problems with the supply chain, but said they require their suppliers to follow responsible sourcing guidelines.

Apple said it leads the industry in supply chain standards, and last year cut ties with the largest artisanal cobalt supplier. Microsoft told us it does not tolerate child labor and that it is working with NGOs to eliminate it. Samsung said it's mapping its supply chain, and Tesla explained it performs audits, and has very little cobalt in its batteries.

But our investigation shows just how complicated it is to trace child-mined cobalt in the global supply chain. We followed the mineral as it left the mines -- piled high on every mode of transport available, including bicycles. Sacks were already mixed up -- without labels -- making it impossible to know who had mined the mineral inside.

The children's cobalt is brought to a large market where it is bought by a Chinese company for extremely low prices. CBS News wanted to see whether there was any attempt to check at the market whether the cobalt had been mined by children, so Patta's team went back later, with a hidden camera.

When we offered to sell a truck load of cobalt, nobody asked us who mined the mineral, only what the quality was. One man told us that the Chinese traders at the market bought all the cobalt and sold it mainly to one Chinese company, Congo Dongfang Mining, known locally as CDM.

CDM is owned by global Chinese giant Huayou, which said they stopped buying from that market last year and have put in place a detailed program to eliminate child labor from their supply chain.

But in this murky process of sourcing cobalt, one thing is clear; children are still here, carrying the weight of our high-tech world on their shoulders.

CBS News spoke with eight major electronic and vehicle companies who have been connected to this supply chain, and though many have joined initiatives to solve this problem, at the mines Patta visited our team saw little evidence of anyone on the ground helping these children.

We spoke to Pact, an NGO that is working with Apple, Microsoft and Huayou. The charity described the support from these multinational companies as a "drop in the ocean," as countless companies are buying the child mined cobalt.

Tuesday on "CBS This Morning" we will show you more of the story of Ziki, the young boy we found at the mines, and some of the efforts being taken to rescue the children.