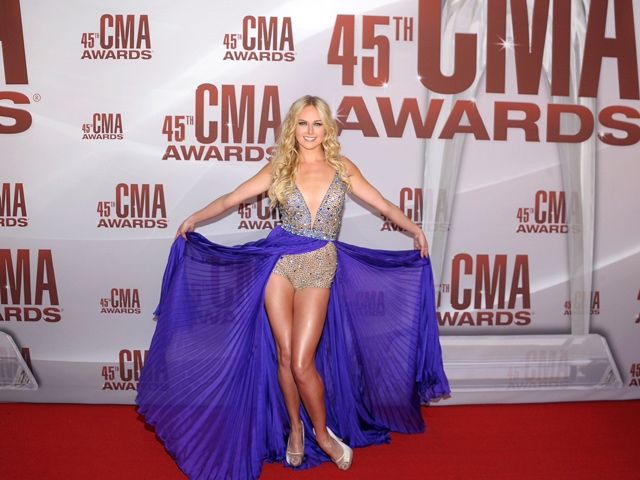 (CBS) Country gals like sequins and metallics when they walk the red carpet these days.

Or at least that was what many of them wore Wednesday night in Nashville to their biggest event of the year, the Country Music Association Awards.

Two-time Entertainer of the Year winner Taylor Swift was one of the few exceptions but her strapless, white, bodice-hugging gown with a long train still managed to land her on the best-dressed lists of many bloggers.

Rocking in silver was Sugarland's Jennifer Nettles, Little Big Town's Kimberly Schlapman in a sequined halter gown by Lorena Sarbu; Le Ann Rimes in a sleeveless ruffled gown with short train, and Kelly Pickler in a shimmery gown that had a waterfall effect.

The show's co-host Carrie Underwood sported both trends in her sparkly, gold red-carpet gown, though her costume changes gave her an opportunity to try out other looks as well. Also in gold - a low-cut, strapless gown - was Lady Antebellum's Hilary Scott.

Lambert later wore a fully-beaded fuschia cocktail dress by Atelier Pavoni when she accepted her prize.

Also opting for the sequin look was TV newscaster Erin Andrews in a short, hot-pink frock. Sandra Lee, another TV personality, wore her jewels encrusted on an off-white strapless gown.

Not everyone got good fashion grades. Shauna Thompson's low-cut midnight blue gown was deemed by some as too fussy and too revealing. She changed into a custom-designed T.Rains dress by Traver Rains for her performance. Susie Brown of Jane Dear Girls was criticized as too Goth in her short black-and-pink dress with a can-can skirt.

But no one came in for the drubbing that Laura Bell Bundy got. She topped what looked like a sheer and short bathing suit with a long pleated purple skirt, slit to the waist. In that outfit, she looked as if she had accidentally stumbled into the other big celeb event going on Wednesday night- the Victoria's Secret fashion show.