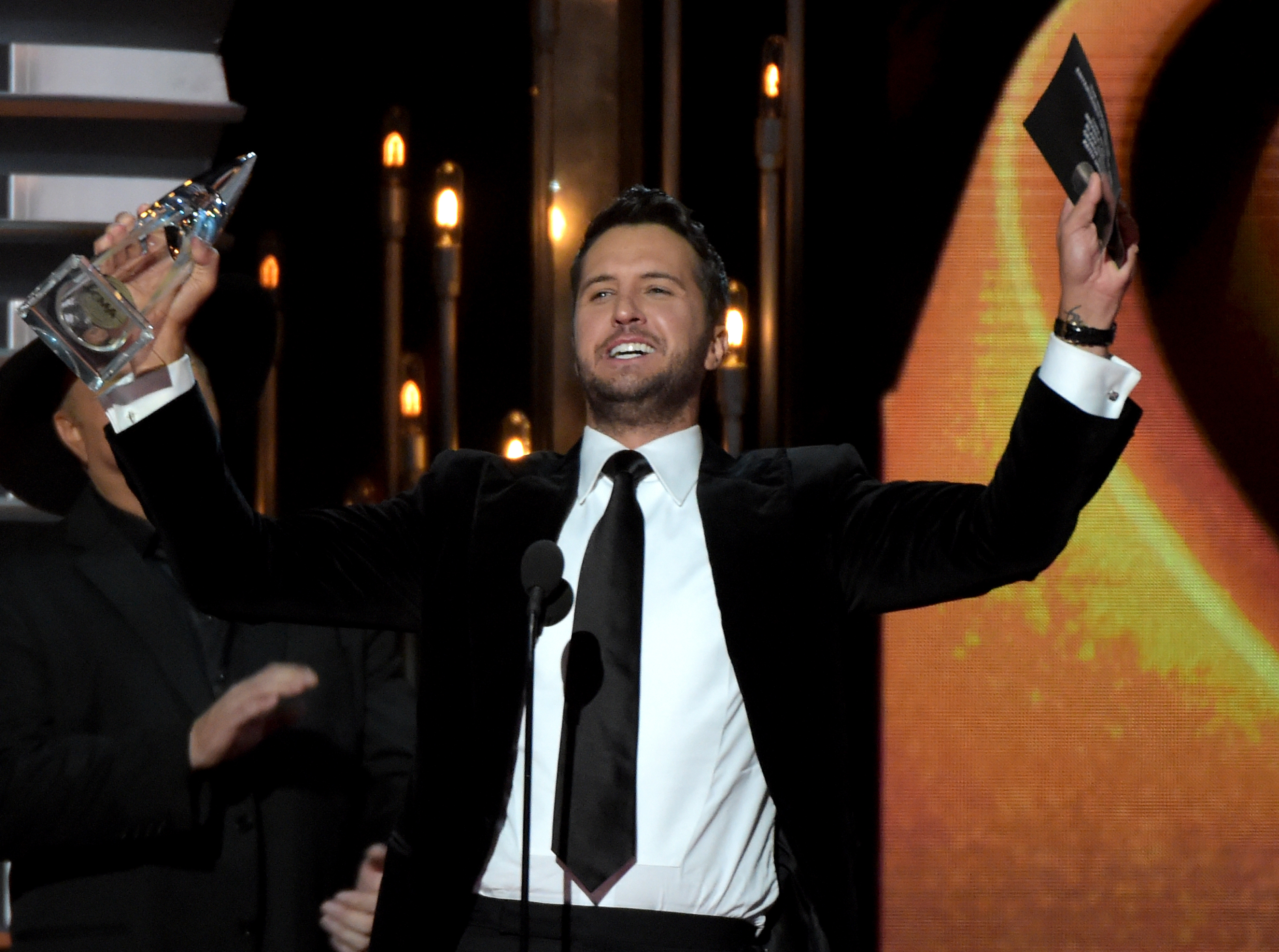 Miranda Lambert was the queen of country at the 2014 CMA Awards, but it was Luke Bryan that walked away with the night's top prize.

Bryan was crowned entertainer of the year at Wednesday's Country Music Association Awards, beating out Lambert, her husband Blake Shelton, George Strait and Keith Urban for the honor.

The win was his first CMA, despite his multiple hits, top-selling albums and top-grossing tours.

"I hope I can have enough time to say everything that's on my mind," an emotional Bryan said, thanking God, his fans, and his teary-eyed wife in the audience at the Bridgestone Arena. "I have some angels in heaven, my brother and sister are making this night possible for me."

Wednesday night marked a breakthrough for Bryan, who was also snubbed at the recent Grammy Awards.

But it was Lambert, who led all nominees heading into the evening with nine, who walked away the big winner -- she took home four trophies, including album of the year for "Platinum" and single of the year for "Automatic." She stole the night with fashion choices that were winners, too, and performances. She sang twice onstage, including a country-tinged version of "All About That Bass" with breakthrough singer Meghan Trainor, where Shelton looked up and bopped his head.

"Let me just say that before I say, I really thought Luke was going to win this," he said. "This means so much to me ... this is a big night for my family."

Carrie Underwood and Brad Paisley, hosting the awards for the seventh time, poked fun at George Strait and Underwood's visible baby bump -- and it was revealed she's expecting a baby boy. Taylor Swift's switch to pop from country was referred to as "Postpartum Taylor Swift Disorder," or PPTSD.

"President Barack Obama doesn't care about PPTSD!" Paisley yelled. Underwood followed with: "I'm pretty sure it's why the Democrats lost the Senate."

The duo also sang a version of Dolly Parton's "Jolene," calling it "Quarantine," and Paisley earned roaring laughter when he told the audience at the Bridgestone Arena that the ABC series "Black-ish," which airs Wednesdays, would not be airing because of the CMAs.

Kacey Musgraves, who earned two Grammy Awards earlier this year, won song of the year for "Follow Your Arrow," which she co-wrote with Brandy Clark, who is openly gay and was among the contenders for new artist of the year.

"Oh my goodness! Do you guys realize what this means for country music?" she said, as Clark and songwriter Shane McAnally stood behind her. "Our genre was built on simple good songs about real life and that's what this was."

The night featured a number of collaborative performances: Musgraves performed with Loretta Lynn, Shelton sang with Ashley Monroe; the Doobie Brothers performed with Lady Antebellum's Hillary Scott, Jennifer Nettles and Hunter Hayes; George Strait and Eric Church performed "Cowboys Like Us"; and pop diva Ariana Grande sported a mini top and skirt as she sang the hit "Bang Bang" alongside Little Big Town, who won vocal group of the year.

Vince Gill earned the Irving Waugh award of excellence, while Dierks Bentley's "Drunk on a Plane" won music video of the year, Florida Georgia Line won vocal duo of the year for a second time and Brett Eldredge was named new artist of the year.