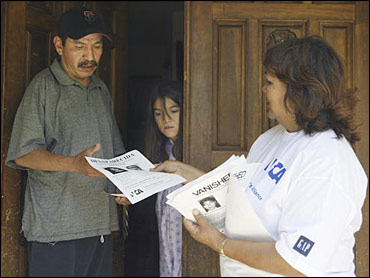 As detectives and volunteers searched the San Jose area Sunday for a 9-year-old abducted from her home, police released video from a neighbor's home surveillance camera they say shows that the kidnapper specifically targeted the girl.

The images on the tape are grainy and at times hard to make out, but it clearly shows the attack was not a random residential burglary, said San Jose Police spokesman Steve Dixon.

"The tape makes it very clear the he was targeting this house," Dixon said Sunday. "He wasn't roaming the neighborhood looking for house to break into. He was there for quite some time, just waiting for this little girl to come home."

Jennette Tamayo was presumed to be with the man who brutally assaulted her mother and brother at their home before driving away with the girl Friday afternoon.

The video did not have any clear shots of the kidnapper's license plate or his face, but it does show the man waited in his car outside the house for about two hours until the girl returned home alone around 4:20 p.m. Friday, police said.

Jennette's mother and brother arrived home about fifteen minutes later and discovered the intruder, who attacked them.

Police said the tape shows the girl's mother, 31-year-old Rosalie Tamayo, running out of her home and screaming for help as a man sped off with the girl in the back seat of his car, crushing rose bushes along the way.

The mother and 15-year-old brother told police they did not recognize the intruder.

Police and county search and rescue teams and some 80 volunteers continued to search neighborhoods, creek beds and parks for any sign of the missing girl Sunday.

Police on Saturday released a sketch of the man, described as in his 30s to early 40s, from 5-feet-2 to 5-feet-5. He was dark haired, unshaven, and wore a gray beanie and silver colored shirt, police said. He may have scratches on his face or arms from a struggle with Jennette's mother.

Dixon said police still had no immediate leads and no motive for the kidnapping.

The kidnapping has shaken residents of the quiet middle class neighborhood, where Jennette lives with her mother, brother and stepfather.

Police initially thought it might have been a burglary gone wrong, but the man took only a few token items and the video suggested he did not try to conceal that he was targeting Jennette's house.

"It does help us to narrow our investigation — to know that the attacker went straight to this house," Dixon said.

The girl's abduction follows other kidnappings of children from their homes in the past two years, including Elizabeth Smart, who was found alive in March nine months after she vanished from her Salt Lake City bedroom, and 7-year-old Danielle Van Dam, who was killed after she was taken by a neighbor from her San Diego home.

The cases frightened parents across the country and led lawmakers to strengthen Amber Alert systems to quickly notify the public of child abductions.

The California Highway Patrol also issued a statewide Amber Alert after Jennette was kidnapped Friday. The alert is for a silver sedan the man was seen driving from the scene.