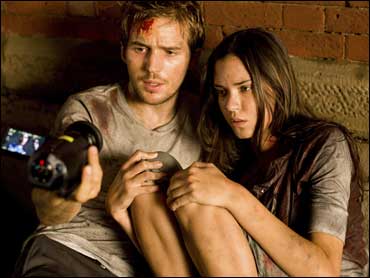 The creature-feature "Cloverfield" became the first monster hit released in 2008, debuting with $41 million, a record opening for January, according to studio estimates Sunday.

Paramount's tale of a giant reptile causing chaos in New York City surpassed the $35.9 million premiere weekend of the "Star Wars" special edition in 1997, the previous best for January.

Overall business surged, with the top-12 movies taking in $135.3 million, up 39 percent from the same weekend last year.

Featuring a cast of unknowns, "Cloverfield" tells its monster story from the perspective of a partygoer's hand-held video camera, which captures the mayhem as the creature tears through the city.

The film benefited from cryptic marketing that sent young moviegoers on a scavenger hunt to decode clues about the movie's plot, images and even its title, which was not confirmed until shortly before its release.

"As we started it, we asked, how do we draw people in and have them say, `Hey, I want to know more about that. That looked cool, that looked intriguing,"' said Rob Moore, Paramount vice chairman. "Then fortunately, they delivered a movie that was as unique and engaging as people had hoped from the marketing campaign."

The big winners at the previous weekend's truncated Golden Globes had mixed results cashing in on their prizes.

Focus Features' gloomy romance "Atonement," the Globe winner for best drama, expanded into wider release and added $4.8 million to its haul, raising its total to $31.9 million. Business was up slightly from the previous weekend.

Yet the Globes' best musical or comedy winner, Paramount's "Sweeney Todd: The Demon Barber of Fleet Street," also added theaters but took in just $2.6 million, down significantly from a weekend earlier. "Sweeney Todd" has taken in $48 million to date.

The televised Globes banquet was canceled because stars planned to boycott the show in support of a strike by the Writers Guild of America, which refused to let its members work on the ceremony. In place of the glitzy Globes show was a hasty news conference rattling off winners' names.

That deprived studios of much of the luster they count on to boost the box office of acclaimed films during awards season. Had the three-hour Globes show aired as usual on NBC, "Atonement," "Sweeney Todd" and other key winners might have done better business this weekend.

"I can only guess, but I think so," said Jack Foley, head of distribution for Focus Features. "I wish it was televised. It's one of the best commercials there is for film."

While "Cloverfield" was more a movie for young males, "27 Dresses" sewed up the women's audience, the two films giving Hollywood a huge lift during what is normally a sleepy time for new releases.

"This is almost like a summer weekend," said 20th Century Fox distribution executive Chris Aronson. "It's almost a counter-programming move where you have two pictures aimed squarely, at least initially, at different audiences, and they both succeeded."

Estimated ticket sales for Friday through Sunday at U.S. and Canadian theaters, according to Media By Numbers LLC. Final figures will be released Tuesday.