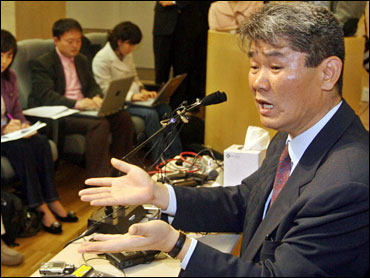 A doctor who provided human eggs for research by cloning pioneer Hwang Woo-suk said in a broadcast Thursday that the South Korean scientist agreed to withdraw a key research paper because most of the stem cells produced for the article were faked.

Roh Sung-il, chairman of the board at Mizmedi Hospital, told KBS television Hwang had agreed to ask the journal Science to withdraw the paper, published in June to international acclaim. Roh provided human eggs for research by Hwang and was one of the co-authors of the article that detailed how individual stem cell colonies were created for 11 patients through cloning.

Roh also told MBC television that Hwang had pressured a former scientist at his lab to falsify data to make it look like there were 11 stem cell colonies.

In a separate report, a former researcher told MBC that Hwang ordered him to fabricate photos to make it appear there were 11 separate colonies.

"This is something I shouldn't have done," the researcher, only identified by his last name Kim whose face wasn't shown. "I had no choice but to do it."

Nine of the embryonic stem cell lines Hwang had claimed were cloned in the paper were faked, Roh said, and the authenticity of the other two was unknown.

In Washington, Science said Thursday morning that it hadn't yet received a request from Hwang for the article to be withdrawn. Spokeswoman Ginger Pinholster said the journal had sent a message to Hwang asking for information.

Roh told MBC that he heard from Hwang on Thursday morning that there were also no embryonic stem cells remaining from the experiments because all colonies have since died in the lab.

"I heard some things that I wasn't aware of when I visited Professor Hwang at his request, that there are no embryonic stem cells," Roh told MBC, adding Hwang himself had been unaware there were no remaining stem cells.

MBC also commissioned its own research that it said failed to show DNA matches between the original and cloned cells, but Hwang told the station that he had "doubt about the accuracy" of their analysis.

Hwang didn't answer his phone and researchers from his lab at Seoul National University couldn't be immediately reached for comment.

Hwang was staying at the university's hospital, spokesman Yang Sung-ki said Thursday evening. The researcher has been undergoing treatment there for stress since last week, returning briefly to work for a day this week.

South Korean President Roh Moo-hyun, in the Philippines for a state visit, called for caution regarding the reports on Hwang's work. "Let's watch the situation," Roh said according to Choi In-ho, the president's vice spokesman.

Regarded as a world-leading researcher in stem cells, Hwang's work has recently come under a cloud of suspicion. Last month, he publicly apologized after admitting that, despite earlier denials, he used eggs donated by two junior female scientists in his lab, a violation of international ethics guidelines.

Hwang also stepped down as head of the World Stem Cell Hub, an international project launched in October aimed at finding treatments for incurable diseases.

University of Pittsburgh researcher Gerald Schatten has already asked that Science remove him as the senior author of the report, citing questions about the paper's accuracy.

Hwang's team has admitted it made an error that led to duplicated photos accompanying the article, but editors of Science have so far stood by the paper's findings.

Amid the controversy, Seoul National University also announced this week it would conduct an internal probe into Hwang's research. The university was to hold a previously scheduled news conference Friday morning to discuss the investigation.

Scientists hope that stem cell research could one day lead to finding cures for hard-to-treat diseases such as paralysis and Parkinson's disease.