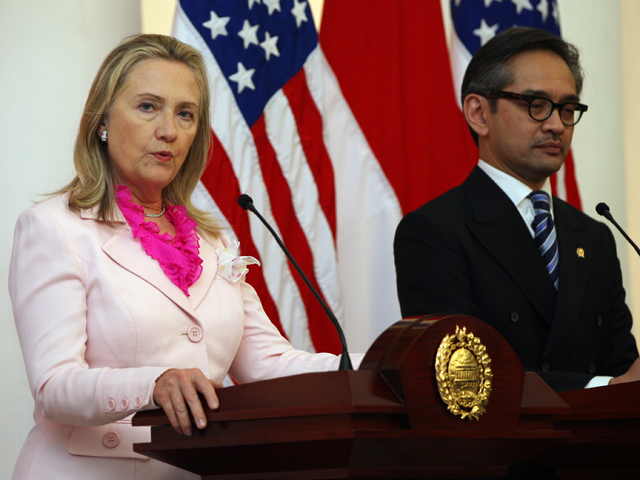 And she urged all involved to make "meaningful progress" on a process for ending conflicts "without coercion, without intimidation and certainly without the use of force" by November.

In Indonesia's capital before heading to China, Clinton offered strong U.S. support for a regionally endorsed six-point plan to ease rising tensions by implementing a code of conduct for all claimants to disputed islands. Jakarta is the headquarters of the Association of South East Asian Nations, and Clinton pressed the group to insist that China agree to a formal multilateral mechanism to reduce short-term risks of conflict and ultimately come to final settlements over sovereignty.

The stance puts the U.S. squarely at odds with China, which has become increasingly assertive in pressing its territorial claims with its smaller neighbors and wants the disputes to be resolved individually with each country, giving it greater leverage than dealing with a bloc.

Clinton made the case in Tuesday meetings with Indonesian President Susilo Bambang Yudhoyono and ASEAN secretary general Surin Pitsuwan, a day after she delivered the same message to Indonesian Foreign Minister Marty Natalegawa.

"The United States has a national interest, as every country does, in the maintenance of peace and stability, respect for international law, freedom of navigation, unimpeded lawful commerce in the South China Sea," Clinton told reporters at a news conference with Natalegawa.

"The United States does not take a position on competing territorial claims ... but we believe the nations of the region should work collaboratively to resolve disputes without coercion, without intimidation and certainly without the use of force," she said. "That is why we encourage ASEAN and China to make meaningful progress toward finalizing a comprehensive code of conduct in order to establish rules of the road and clear procedures for peacefully addressing disagreements."

Indonesia has played a leading role in putting the six-point plan together after ASEAN was unable to reach consensus on the matter in July. Clinton said the U.S. is "encouraged" by the plan but wants it acted on — particularly implementation and enforcement of the code of conduct, which has languished since a preliminary framework for it was first agreed upon in 2002. Clinton said the U.S. wants to see the disputes resolved between China and ASEAN.

The U.S. believes the alliance has collective clout that its 10 members do not have individually, and Clinton said the U.S. sees it as important for ASEAN and China to have something to show for their efforts by a November summit of East Asian leaders that President Barack Obama plans to attend in Cambodia.

"It is time for diplomacy," she said. "We have the East Asia Summit coming up. This should be the goal that diplomacy pursues to try to attain agreement ... on a robust code of conduct to begin to try to literally calm the waters and enable people to work together toward better outcomes. I think we can make progress before the East Asia Summit and it is certainly in everyone's interest that we do so."

Natalegawa agreed with Clinton on the importance of the code of conduct and the need to set it up quickly.

"We must try to have the code of conduct," he said. "Absent a code of conduct, absent the diplomatic process, we can be certain of more incidents and tension for our region. Absent an ASEAN unity, the question will become like a loose cannon in the way the issue is discussed."

China and a host of Southeast Asian countries, including the Philippines, Vietnam and Brunei, have overlapping claims to several small, but potentially energy-rich areas of the South China Sea.

In July, China angered the United States, as well as Vietnam and the Philippines, by creating a city and military garrison on a remote island 220 miles from its southernmost province intended to administer hundreds of thousands of square miles of water where China wants to strengthen its control over disputed islands. China, which also has disputes with Japan in the East China Sea, rejected the criticism.

"The South China Sea issue is a dispute between the south China region countries and should be negotiated and resolved by them in a friendly way," spokesman Hong Lei said. "Other countries outside the region should respect the choice of those countries and do more to help regional peace and stability and not the opposite."

Clinton was traveling to Beijing on Tuesday to continue talks on the South China Sea and a number of other issues, including the crisis in Syria and ways to deal with Iran and North Korea's nuclear programs.

Clinton was in Indonesia on the second stop of an 11-day tour that will take her to East Timor, Brunei and Russia's Far East after China.

While in Jakarta, Clinton said she had raised human rights concerns in the wake of recent upticks in mob violence against religious minorities. She said Indonesia and the United States agreed that "there should be no discrimination against minorities on any basis and that we should promote freedom and tolerance for all."

Human Rights Watch had called for Clinton to bring up such cases and press the government "to take concrete steps to address rising religious intolerance" in Indonesia. It also asked her to address Indonesian authorities' use of blasphemy and criminal defamation laws that it says are being used to persecute minorities and political activists.

In addition, Clinton called for a dialogue in Indonesia's restive Papua province, which has been plagued by separatist violence.

"We support the territorial integrity of Indonesia, and that includes Papua and West Papua provinces," she said. "We believe strongly that dialogue ... would help address the concerns that Papuans have."

Papua, a former Dutch colony in the western part of New Guinea, was incorporated into Indonesia in 1969 after a U.N.-sponsored ballot. A small, poorly armed separatist group known as the Free Papua Movement has battled for independence since then.