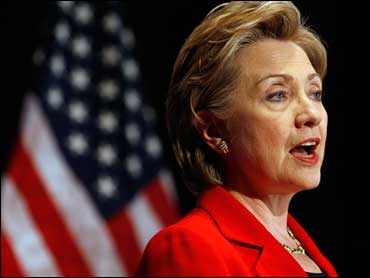 The New York senator proposed greater protections for lenders from possible lawsuits by investors, a variation of so-called tort reform. For years, GOP leaders have called for restrictions on what they consider unwarranted lawsuits against businesses. Democrats have often resisted them on grounds they limit injured parties' legitimate rights to redress.

"Many mortgage companies are reluctant to help families restructure their mortgages because they're afraid of being sued by the investment banks, the private equity firms and others who actually own the mortgage papers," Clinton said in what she billed as a major address on the economy at the University of Pennsylvania.

"This is the case even though writing down the value of a mortgage is often more profitable than foreclosing," she said. Clinton said she would offer legislation "to provide mortgage companies with protection against the threat of such lawsuits," but provided no further details.

She also called on President Bush to appoint "an emergency working group on foreclosures" to recommend new ways to confront housing finance troubles. She said the panel should be led by financial experts such as Robert Rubin, who was treasury secretary in her husband's administration, and former Federal Reserve chairmen Alan Greenspan and Paul Volcker.

Clinton and Sen. Barack Obama are campaigning heavily in Pennsylvania, which holds its presidential primary April 22 to allocate 158 delegates, the largest single prize left in the campaign season. There were 34,000 foreclosure notices issued in Pennsylvania last year, Clinton's campaign said.

Clinton said she supports pending legislation to establish an auction system for hundreds of thousands mortgages in default. Under the plan, drafted by Democratic lawmakers, lenders "could sell mortgages in bulk to banks and other buyers," Clinton said, who in turn would "restructure them to make them affordable for families, because they know the government will guarantee them once they're reworked."

The Federal Housing Administration, she said, "should also stand ready to be a temporary buyer to purchase, restructure, and resell underwater mortgages" if the auction plan falls short.

Clinton said a recently enacted $168 billion stimulus package "did next to nothing to help homeowners and communities struggling with foreclosure."

"If the Fed can extend $30 billion to help Bear Stearns address their financial crisis," she said, "the federal government should provide at least that much emergency help to families and communities address theirs."

Clinton's remarks built on her earlier proposals on the housing issue. Last week she called for a new stimulus package to include $30 billion to help state and local governments buy foreclosed properties, restructure mortgages, and undertake "anti-blight programs." She proposed another $10 billion for state housing agencies to refinance "unworkable mortgages."

Clinton also has called for a five-year freeze on interest rates for all subprime mortgages, which often go to borrowers with poor credit ratings.

Obama was not campaigning Monday because he is spending some down time in the U.S. Virgin Islands. Obama was keeping such a low profile that his campaign would not say where he is staying, and local officials were also mum. An official at Government House in the capital, Charlotte Amalie, would only confirm that Obama was in St. Thomas, the most populated island.

In a phone call with reporters, Plouffe called Clinton "the prohibitive favorite" in the state, and said Obama would try to do "as well as we can there."

Plouffe said Obama, if nominated, would put more states in play in the fall than Clinton could, because he would draw more support from independents.