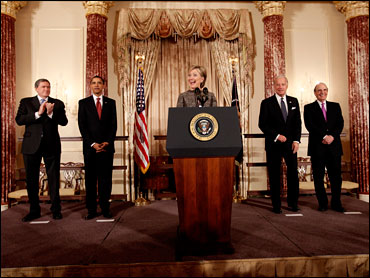 Hillary Rodham Clinton took charge of the State Department on Thursday, proclaiming the start of a new era of robust U.S. diplomacy and announcing the appointment of two special envoys to South Asia and the Middle East.

With Mr. Obama at her side in the ornate Ben Franklin Room, the nation's 67th secretary of state introduced former Senate Majority Leader George J. Mitchell, D-Maine, as a special envoy for the Middle East. Former U.N. ambassador Richard Holbrooke was announced as a special adviser on Afghanistan and Pakistan.

The posts are the first of several new special envoys the administration plans to create to deal with particularly vexing problems abroad.

Mitchell said he'll be facing a "volatile, complex and dangerous" conflict - one that has become so entrenched, it's seen by many as unchangeable. But he said Mr. Obama and Clinton aren't convinced of that.

Later, Mr. Obama said he will aggressively seek a lasting peace between Israel and the Palestinians and that the U.S. will always defend Israel's "right to defend itself."

Meanwhile, Holbrooke noted that Pakistan and Afghanistan have "different histories" and traditions, yet find themselves inextricably linked. Referring to the Taliban and al Qaeda, he said both countries are waging a difficult struggle against an "enemy without any scruples" in the tribal areas along their shared border.

Mr. Obama cited a "deteriorating situation in Afghanistan and Pakistan" and said that region is now "the central front" in the battle against terrorism and extremism.

Earlier Thursday, Clinton pledged to boost the morale and resources of the diplomatic corps and promised them a difficult but exciting road ahead. A key player in the war on terrorism, Clinton got a hero's welcome as she arrived for her first day on the job, reports CBS News correspondent Chip Reid.

"I believe with all of my heart that this is a new era for America," she said to loud applause in the main lobby of the department's headquarters, which President Barack Obama visited later in the day to underscore his administration's commitment to diplomacy.

Clinton began her job at the State Department one day after her Senate confirmation.

"This is going to be a challenging time and it will require 21st Century tools and solutions to meet our problems and seize our opportunities," Clinton said at her welcoming. "I'm going to be asking a lot of you. I want you to think outside the proverbial box. I want you to give me the best advice you can."

"I want you to understand there is nothing that I welcome more than a good debate and the kind of dialogue that will make us better," she said. "We cannot be our best if we don't demand that from ourselves and each other."

In her spirited 10-minute pep talk, she spoke of the importance of defense, diplomacy and development - the "three legs to the stool of American foreign policy" - and noted that the State Department is in charge of two of them.

"We are responsible for two of the three legs," said the former New York senator and first lady. "And we will make clear as we go forward that diplomacy and development are essential tools in achieving the long-term objectives of the United States."

Clinton's mandate from Mr. Obama is to step up diplomatic efforts and restore the nation's tattered image overseas. She has vowed to make use of "smart power" to deal with international challenges.

"At the heart of smart power are smart people, and you are those people," she told the assembled throng. "And you are the ones that we will count on and turn to for the advice and counsel, the expertise and experience to make good on the promises of this new administration."

Clinton takes over an agency that was often sidelined during George W. Bush's eight-year presidency, particularly in his first term over the decision to go to war in Iraq. Although former Secretary of State Condoleezza Rice restored some of the department's influence, diplomats still complained of a lack of access to the top, as well as funding.

In introductory remarks, Steve Kashkett, vice president of the union that represents diplomats, noted that Mr. Obama and Clinton had both "decried the neglect that the foreign service and the State Department as a whole have suffered in recent years."

Clinton, meanwhile, sought to reassure frustrated diplomats that they will be heard.

"This is a team, and you are the members of that team," she said. "We are not any longer going to tolerate the kind of divisiveness that has paralyzed and undermined our ability to get things done for America."

She predicted her team would experience "a great adventure. We'll have some ups and some downs. We'll face some obstacles along the way. But be of good cheer and be of strong heart, and do not grow weary as we attempt to do good on behalf of our country and the world. ... And now, ladies and gentlemen, let's get to work."

After her remarks, Clinton made telephone calls to foreign leaders, toured some of the department's key offices and received briefings before hosting Mr. Obama, Vice President Joe Biden and national security adviser James Jones. They are to meet in a closed-door session before Obama addresses the diplomatic corps.