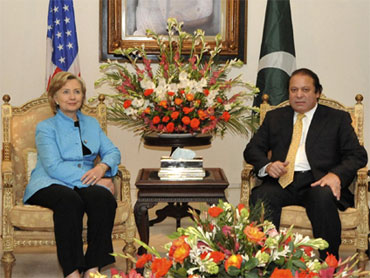 U.S. Secretary of State Hillary Rodham Clinton said Thursday that Pakistan squandered opportunities over the years to kill or capture leaders of the al Qaeda terrorist network responsible for the Sept. 11 attacks.

While U.S. officials have said they believe Osama bin Laden and senior lieutenants have been hiding in the rugged terrain along the border with Afghanistan, Clinton's unusually blunt comments went further as she suggested that Pakistan's government has done too little to act against al Qaeda's top echelon.

"I find it hard to believe that nobody in your government knows where they are and couldn't get them if they really wanted to," Clinton told the Pakistani journalists in Lahore. "Maybe that's the case. Maybe they're not gettable. I don't know."

With the country reeling from Wednesday's devastating bombing that killed at least 105 people in Peshawar, Clinton also engaged in an intense give-and-take with students at the Government College of Lahore. She insisted that inaction by the government would have ceded ground to terrorists.

"If you want to see your territory shrink, that's your choice," she said, adding that she believed it would be a bad choice.

How can the U.S. at this time be so insensitive for Mrs. Clinton to speak out in public in this way," asked a senior Pakistani government official. "These remarks suggest a very high degree of insensitivity."

On Clinton's flight to the capital, U.S. Ambassador Anne Patterson said Clinton's remarks to the Pakistani journalists approximate what the Obama administration has told Pakistani officials in private settings.

"We often say, `Yes, there needs to be more focus on finding these leaders,"' Patterson said. "They other thing is, they lost control of much of this territory in recent years and that's why they're in South Waziristan right now."

The army began an offensive Oct. 17 against Taliban forces in a portion of the tribal areas near the Afghan border. Patterson noted that al Qaeda is mostly in that region.

In Lahore, Clinton told university students that their government had little choice in taking a tougher approach.

Dozens of students rushed to line up for the microphone when the session began. Their questions were not hostile, but showed a strong sense of doubt that the U.S. can be a reliable and trusted partner for Pakistan.

One woman asked whether the U.S. can be expected to commit long term in Afghanistan after abandoning the country after Russian occupiers retreated in 1989.

"What guarantee," the woman asked, "can Americans give Pakistan that we can now trust you - not you but, like, the Americans this time - of your sincerity and that you guys are not going to betray us like the Americans did in the past when they wanted to destabilize the Russians?"

Clinton responded that the question was a "fair criticism" and that the U.S. did not follow through in the way it should have. "It's difficult to go forward if we're always looking in the rearview mirror," said Clinton, on the second of a three-day visit, her first to Pakistan as secretary of state.

The Peshawar bombing in a market crowded with women and children appeared timed to overshadow her arrival. It was the deadliest attack in Pakistan since 2007.

She likened Pakistan's situation - with Taliban forces taking over substantial swaths of land in the Swat valley and in areas along the Afghan border - to a theoretical advance of terrorists into the United States from across the Canadian border.

It would be unthinkable, she said, for the U.S. government to decide, "Let them have Washington (state)" first, then Montana, then the sparsely populated Dakotas, because those states are far from the major centers of population and power on the East Coast.

During her hourlong appearance at the college, Clinton stressed that a key purpose of her trip was to reach out to ordinary Pakistanis and urge a better effort to bridge differences and improve mutual understanding.

"We are now at a point where we can chart a different course," she said, referring to past differences over an absence of democracy in Pakistan and Pakistani association with the Taliban in Afghanistan.

But her tough comments about Pakistan's will to take on al Qaeda leaders might not sit well among Pakistanis who long have complained about American demands on their country.

Clinton has ruffled feathers before with blunt comments on her trips. On her first visit to Asia in February, she discussed the possibility of a succession crisis in North Korea and suggested the U.S. would not press China that hard on human rights.

On a later trip, she drew criticism from Israeli leaders for talking about a "defense umbrella" for Arab Gulf states to protect them from a potential nuclear threat from Iran.

Despite her comments during the town hall event in Lahore, Clinton declined to touch on the sensitive issue of missile attacks from U.S. drones against on militants inside Pakistan.

The subject has stirred some of the strongest feelings of anti-Americanism in the country, but the U.S. routinely refuses to acknowledge publicly that the attacks are taking place.

"There is a war going on," Clinton said, saying only that the U.S. wants to help Pakistan be successful.

The United States has provided Pakistani commanders with video images and target information from its military drones as the army pushes its ground offensive in Waziristan, U.S. officials said this week.

The U.S. in recent months has rushed helicopters and other military equipment to the country as Islamabad began offensives in Swat Valley and South Waziristan.