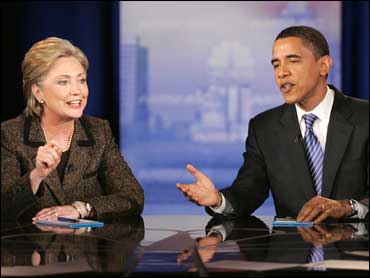 Hillary Rodham Clinton and Barack Obama clashed over NAFTA, health care and the war in Iraq Tuesday night in a crackling debate at close quarters one week before a pivotal group of primaries.

Charges of negative campaign tactics were high on the program, too.

"Senator Obama has consistently said I would force people to have health care whether they can afford it or not," said Clinton, insisting it was not true.

Responding quickly, Obama countered that former first lady had consistently claimed his plan "would leave 15 million people out ... I dispute that. I think it is inaccurate," he said.

The tone was polite yet pointed, increasingly so as the 90-minute session wore on, a reflection of the stakes in a race in which Obama has won 11 straight primaries and caucuses and Clinton is in desperate need of a comeback.

The debate took place as the latest polls show Clinton's lead in Texas evaporating and her once 20-point advantage in Ohio shrinking to single digits, reports CBSNews.com's Kevin Hechtkopf. This is the last scheduled debate before the key March 4th primaries in those and other states.

Clinton said as far as she knew her campaign had nothing to do with circulating a photograph of Obama wearing a white turban and a wraparound white robe presented to him by elders in Wajir, in northeastern Kenya.

The gossip and news Web site The Drudge Report posted the photograph Monday and said, without substantiation, that it was being circulated by "Clinton staffers."

"We have no evidence where it came from," Clinton said, making clear that's not the kind of behavior she wants in her campaign.

"I take Senator Clinton at her word that she knew nothing about the photo," Obama said.

The two rivals, the only survivors of a grueling primary season, sat about a foot apart at a table on stage at Cleveland State University. It was the 20th debate of the campaign, 10 months to the day after the first.

The race was far different in April 2007, Clinton the front-runner by far. Now Obama holds that place, both in terms of contests and delegates won.

Clinton has to sweep all the rest of the primaries after next Tuesday and win 60 percent of the votes in the process just to even the delegate gap, reports CBS News correspondent Jim Axelrod. She hasn't come within 17 points of Obama in the last 11 contests.

"Tonight was the culmination of over a year's worth of campaign points and arguments," said CBSNews.com senior political editor Vaughn Ververs. "It was certainly the best debate from both a substantive and political perspective and centered on the basic fault line of experience versus change. Experience kept change on the defensive for most of the evening and Obama was revealed to be a much more malleable candidate than he has in the past when it came to the finer points of issues like Iraq and trade."

"Whether Clinton did enough to stop his momentum and prevail in the must-win states of both Texas and Ohio next Tuesday remains to be seen," Ververs said.

Both Obama and Clinton were on the receiving end of pointed questions from Tim Russert of NBC News, one of two moderators for the event.

Asked whether he was waffling on his pledge of agreeing to take federal funds for the fall campaign, Obama said he was still contesting the primaries.

"If I am the nominee I will sit down with John McCain and make sure we come up with a system that is fair to both sides," he said. Obama could presumably raise far more money than the federal system provides, but accepting government money precludes that.

The equivalent question to Clinton concerned the income tax returns that she and her husband, former President Clinton, file jointly.

"I will release my tax returns," Clinton said, if she becomes the Democratic nominee. She then added she might do so "even earlier," but not before Tuesday's primary.

The two rivals also debated NAFTA, the free trade agreement with Canada and Mexico that is wildly unpopular with blue-collar workers whose votes are critical in any Democratic primary in Ohio.

Neither one said they were ready to withdraw from the agreement, although both said they would use the threat of withdrawal to pressure Mexico to make changes.

"I have said I would renegotiate NAFTA," said Clinton. "I will say to Mexico that we will opt out of NAFTA unless we renegotiate it."

Obama said Clinton has tried to have it both ways, touting the trade deal in farm states where it's popular while finding fault with it in places like Ohio.

"This is something I have been consistent about," said Obama, who said he went to the American Farm Bureau Federation to tout his opposition and used it as an issue in his 2004 Senate campaign.

"That conversation I had with the Farm Bureau, I was not ambivalent at all," said Obama.

"The issue isn't what we would do now," Axelrod said. "The issue is what we've said and done over the last dozen years, because people have a right to know not just where you are today in the middle of the campaign, but where you have been yesterday and where you're likely to be tomorrow."

But Ohio governor Ted Strickland, a Clinton supporter, backed her in the back and forth exchange.

"She ought not to be hurt by her position on NAFTA," he said. "I think it's unfair for her to be held accountable. She had no vote on NAFTA."

On the war, both candidates denounced President Bush's record on Iraq, then restated long-held disagreements over which of them was more opposed.

Clinton said she and Obama had virtually identical voting records on the war since he came to the Senate in 2005.

The former first lady voted in 2002 to authorize the war, at a time when Obama was not yet in Congress, and he tried to use the issue to rebut charges that he is ill-prepared to become commander in chief.

"The fact is that Senator Clinton often says that she is ready on day one, but, in fact, she was ready to give in to George Bush on day one on this critical issue," Obama said.

Obama also sought to distance himself from an endorsement from the Rev. Louis Farrakhan, the controversial Chicago-based minister who has made numerous anti-Semitic comments in the past.

Obama said he hadn't sought the endorsement, and that he had denounced the remarks.

Clinton interjected at one point, saying that in her initial Senate campaign in New York in 2000, she was supported by a group with virulent anti-Semitic views.

"I rejected it, and said it would not be anything I would be comfortable with." She said rejecting support was different than denouncing it, an obvious jab at Obama.

He responded by saying he didn't see the difference, since Farrakhan hadn't done anything except declare his support. But given Clinton's comments, he said, "I happily concede the point and I would reject and denounce."

The audience applauded at that.

Both campaigns tried to put the best spin on their candidate's performance.

"It was an extremely strong performance," Clinton's chief strategist Mark Penn said in the spin room. "If you care about universal healthcare, she said how important it is, how passionate she's going to fight for it. If you care about jobs and the special interests, she's said she's going to take $55 billion from the special interests and turn that over to programs that would benefit the middle class. And if you're someone who cares about foreign affairs or national security, she made clear she's the person who knows how to deal with Russia and the tough situations that we're seeing."

Axelrod cast the debate as a success for Obama.

"I think it was a great night," he said. "I think that Senator Obama was strong, resolute about where he wants to take the country. I thought his discussion of Iraq and foreign policy was very strong. And I think he has a clear economic vision of where he wants to take the country. He talked about the things we need to do to create jobs and opportunity, here in Ohio and across the country. There were some jabs thrown his way, but I think they were glancing blows."