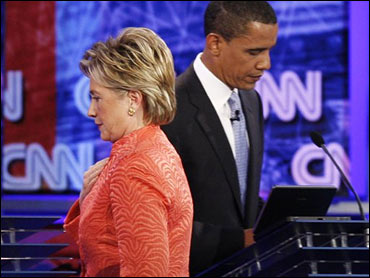 The New York senator, in an interview with Iowa's Quad-City Times, made her first direct criticism of her chief rival after the two campaigns engaged in a back-and-forth about Obama's remarks in Monday night's debate.

In the debate, Obama was asked if he would be willing to meet — without precondition — in the first year of his presidency with the leaders of Iran, Syria, Venezuela, Cuba and North Korea.

"I would," he responded.

Clinton said she would not.

"I don't want to be used for propaganda purposes," she said. Her campaign quickly posted video of her answer online, trying to show she has a different understanding of foreign policy than her chief rival.

Asked about the exchange, she told the newspaper that Obama is regretting his answer a day later.

"I thought that was irresponsible and frankly naive," Clinton said. The interview was posted on the newspaper's Web site.

In a separate interview with the newspaper, Obama said: "What she's somehow maintaining is my statement could be construed as not having asked what the meeting was about. I didn't say these guys were going to come over for a cup of coffee some afternoon."

The rival campaigns clashed over the meaning of Obama's answer. Clinton supporters characterized it as a gaffe that underscored the freshman senator's lack of foreign-policy savvy, while Obama's team claimed his response displayed judgment and a repudiation of President Bush's diplomacy.

"I would think that without having done the diplomatic spadework, it would not really prove anything," former Secretary of State Madeleine Albright said in a conference call with reporters set up by the Clinton campaign.

"A great nation and its president should never fear negotiating with anyone and Senator Obama rightly said he would be willing to do so — just as Richard Nixon did with China and Ronald Reagan with the Soviet Union," Lake said.

In a memo from Obama spokesman Bill Burton, the campaign contended that Obama's comments played well with focus groups that watched the debate and "showed his willingness to lead and ask tough questions on matters of war."

Obama "offered a dramatic change from the Bush administration's eight-year refusal to protect our security interests by using every tool of American power available — including diplomacy," said the memo.

Obama adviser David Axelrod said on Tuesday that Obama would not just meet blindly with such leaders but only after diplomatic spadework had been accomplished.

Americans "are sick of the Bush diplomacy and aren't interested in continuing it," said Axelrod.

The Obama campaign was quick to point to an April 23 quote from Clinton in which she said, "I think it's a terrible mistake for our president to say he won't talk to bad people." That, Obama representatives said, showed Clinton had changed her position.

Clinton advisers noted that the New York senator's full quote included a line that she would first "begin diplomatic discussions with those countries" before such meetings — same as she said in Monday's debate.

"I never would have gotten out of the debate last night that there was any change in position," Albright said.

She emphasized that Obama had said he would meet with such leaders in his first year without preconditions.

"If you look back at real breakthroughs and diplomatic history, what you basically find is that in order to understand where the situation is, to clear the underbrush away, it is necessary to have lower level people make the initial contact," Albright said.

In a memo, Clinton spokesman Phil Singer said Obama "has committed to presidential-level meetings with some of the world's worst dictators without precondition during his first year in office. Senator Clinton is committed to vigorous diplomacy but understands that it is a mistake to commit the power and prestige of America's presidency years ahead of time by making such a blanket commitment."

Obama representatives also sought to emphasize anew Clinton's initial support for the war, echoing comments by the candidate himself who asserted in the debate: "The time to ask how we're going to get out of Iraq was before we got in."

Rival John Edwards, who campaigned in South Carolina on Tuesday, echoed Clinton's comments in the debate.

"I would not commit myself on the front end openly to meet with (Iranian President Mahmoud) Ahmadinejad, (North Korean leader) Kim Jong Il, (Venezuelan President) Hugo Chavez," Edwards told reporters in McClellanville, S.C. "I think there's a real potential that would be used as a propaganda tool."