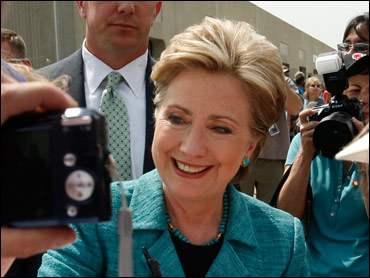 
The dying days of the Hillary Clinton campaign have brought the breathtaking spectacle of a candidate lashing out at every element of public life that has nourished her career. The über-wonk has disparaged economists and expertise. The staunch ally of black America has attacked her opponent for lacking support of "working, hard-working Americans, white Americans." People who thought they knew Hillary Clinton have gazed in astonishment: What has she become? The answer is, a conservative populist.

Consider this analysis recently offered by Bill Clinton in Clarksburg, West Virginia: "The great divide in this country is not by race or even income, it's by those who think they are better than everyone else and think they should play by a different set of rules." This is precisely the dynamic that allows multimillionaires like George W. Bush and Bill O'Reilly to present themselves as being on the side of the little guy. A more classic expression of conservative populism cannot be found.

Historically, the conservative populist's social divide ran along racial and ethnic lines. In recent years, overt racism has all but disappeared from mainstream political life, and even racial hot button appeals like the 1988 Willie Horton ad have grown rare. What remains is a residue of nostalgia about small towns--whose residents are said to have stronger values and work harder than other Americans, and who also happen to be overwhelmingly white. In 2004, after John Kerry declared that some entertainers supporting him represented "the heart and soul of America," George W. Bush embarked upon a national tour of small- and mid-sized cities, where he would say, "I believe the heart and soul of America is found in places like Duluth, Minnesota," or other such places.

Likewise, Bill Clinton recently declared, "The people in small towns in rural America, who do the work for America, and represent the backbone and the values of this country, they are the people that are carrying her through in this nomination." The corollary--that strong values and hard work is in shorter supply among ethnically heterogeneous urban residents--is left unstated. Hillary Clinton's statement about "hard-working Americans, white Americans" simply made explicit a theme that conservative populists usually keep implicit.

Liberal populism is mostly harnessed to a concrete legislative program aimed at broadening prosperity. Al Gore's "people versus the powerful" campaign focused on his differences with Bush over issues like regulation of HMOs and progressive taxation. Conservative populism, by contrast, is a way of exploiting the grievances it identifies without redressing them. It has an ever-shifting array of targets — Michael Dukakis's veto of a law requiring students to recite the Pledge of Allegiance, or the rantings of Jeremiah Wright — but no way to knock them down.

Conservative populists sometimes ape liberal populism by promising material benefits to average people. But the promise is structured so as to pose no threat to any wealthy economic interest. George W. Bush offered tax cuts to the middle class, but paired them with far larger tax cuts for the rich, so that, ultimately, the middle class bore a larger proportion of the tax burden.

Hillary Clinton's embrace of the gas tax holiday is a miniature example of the same pattern. Her plan, which rests upon the political principle that high gasoline prices are unacceptable and that the federal gas tax is a burden on hard-pressed Americans, is highly congenial to the interests of oil companies. Yet she presents it as an assault on Big Oil, much as Bush presented his tax cuts as a way to force the rich to pay a higher share of the burden of government.

If economists or other social scientists dispute the conservative populist's claims, that is only because they, too, are elitists. Bush would dismiss objections to the upper class tilt of his tax cuts by picking a middle class family (in this case, the Muellers) and saying, "Oh, some of the sophisticates will say that $2,700 doesn't matter to the Muellers. 'It doesn't sound like a lot to me.' It's a lot to them. That's what counts."

And so, when Tim Russert said that economists believe the gas tax holiday won't lower prices at the pump, Clinton campaign chairman Terry MacAuliffe replied, "Maybe for Barack Obama and for many of your economists, Tim, who you may talk to, you know what, maybe an extra hundred bucks for them isn't a big deal. But I can tell you this, it is a big deal for most Americans."

Social science analysis is the mortal enemy of conservative populism. The liberal populist sees politics as a series of quantifiable trade-offs between competing interests. The conservative populist offers an appeal that can't be quantified: Who shares your values? Who is more manly? (James Carville: "If she gave him one of her cojones, they'd both have two.")

If a liberal populist cites experts or numbers to back his position, that only proves to the conservative populist that he is out of touch. It's the intellectual equivalent of buying arugula from Whole Foods. A Clinton endorser addressed a rally last month, "You didn't go to Harvard! You weren't born with a silver spoon in your mouth!" (Never mind that Clinton graduated from Yale Law School and had a far more stable, middle class upbringing than Obama.) In the liberal populists' world, the locus of evil is K Street. In the conservative populists' world, the locus of evil is Cambridge, Massachusetts.

In Clinton's defense, she obviously does not believe her own social conservative rhetoric. But neither do Republican social conservatives. She is not running for president so she can suspend the gas tax any more than George H. W. Bush sought the office on order to increase the rate of flag-saluting.

One conceit of the conservative populist style is that its practitioners are "real," while its targets are "fake." For years, Hillary Clinton put herself forward as the earnest liberal policy wonk she actually is, while conservatives lambasted her as a phony. Since she started campaigning as the enemy of all she once held dear, some conservatives have started to appreciate her, even lauding her authenticity. The Weekly Standard's Noemie Emery gushed that after March 4, Hillary "began to seem real." Indeed, she is now real in exactly the same way the conservative populists imagine themselves to be.

Jonathan Chait is a senior editor at The New Republic.
By Jonathan Chait
If you like this article, go to www.tnr.com, which breaks down today's top stories and offers nearly 100 years of news, opinion and analysis