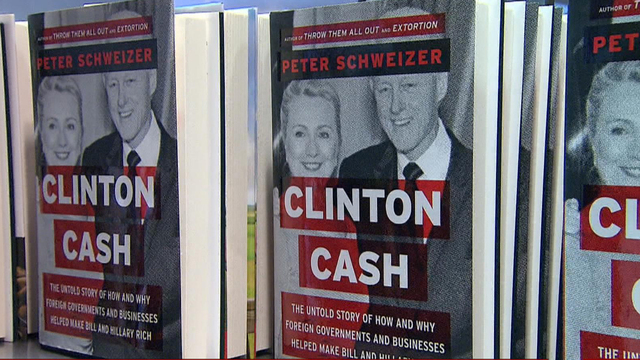 The publisher of "Clinton Cash," a book that takes a critical look at the finances of former President Bill Clinton and his wife, Hillary, has issued "seven or eight factual corrections" to the work.

Amazon alerted Kindle eBook readers that the passages that an updated copy of the book with "significant revisions" was now available.

The publisher, HarperCollins, said the changes to author Peter Schweizer's book are "quite minor."

A spokeswoman for the company said, "This is a routine notification that Amazon sends to previous version purchasers whenever there is an updated file. The changes that amazon is referring to as significant are actually quite minor. We made 7-8 factual corrections after the first printing and fixed a technical issue regarding the endnotes. This global fix may have made the changes appear more extensive than they were."

Among the changes that were made, according to Politico and Media Matters:

A passage stated that TD Bank paid Mr. Clinton for speeches, but after his wife left office as secretary of state and no longer had any influence over the Keystone XL pipeline, the bank planned to sell "$1.6 billion worth of shares" in the pipeline. The press release about TD Bank selling shares of the pipeline was revealed to be fake in 2013.

The book states that Mr. Clinton was paid $200,000 for each of three speeches in Ireland and a speech in Jamaica that were arranged by Denis O'Brien, an Irish billionaire. The revised version of the book merely states that O'Brien "arranged speeches" for Mr. Clinton in Ireland but does not reference any payment. Buzzfeed reported that a Clinton spokesman said that neither Mr. Clinton nor the foundation was paid for two of the three speeches. The new version also says that he was paid $225,000 for the speech in Jamaica, not 2011 as the original version said. The allegation in the original book was that O'Brien's company was receiving State Department money through the Haiti Mobile Money Initiative at the same time as O'Brien was arranging lucrative speeches for Clinton.