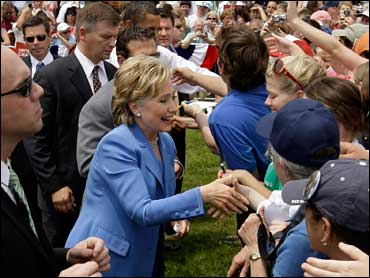 And there was a good reason for that.

Malka Yaacobi, a musician from Cambridge, Massachusetts, said that she voted for Clinton in the primaries, and Obama still did not sit right with her.

To the relief of Democrats worried that the long primary battle had polarized their party beyond repair, Thomas and Yaacobi appeared to be in the minority among the thousands of people who came out to the afternoon rally outside the Unity Elementary School, the first joint campaign appearance between the two brightest stars in the Democratic party since Hillary Clinton dropped out of the presidential race and threw her support behind Barack Obama.

Most of the former Clinton supporters asked said they would support the presumptive Democratic nominee - even if they have reservations.

"Would I prefer Hillary?" said Aimee Caruso, an editor from Lebanon. "Yes, but I'd be just as excited in a sense to see Obama." She said that she had come to see "how two people who battled, who danced a little bit, come together," and added that she took solace in the fact that Clinton would likely work with Obama if he became elected.

"I'm with him," said Carol Bramblett, a retired onetime Clinton supporter from Ridge. She said that while she does have "maybe 1 percent reservations" about Obama, she was happy to have a Democratic nominee who "does have an inspirational quality we don't see in too many politicians."

Even some supporters of presumptive GOP nominee John McCain had kind words for the Democratic hopeful.

"I think it's a wonderful thing for the country to have Obama," said Ilya Mirman, a marketer and McCain supporter from Sudbury, Massachusetts. "I was rooting for him despite that I think he'd be a tougher candidate against the guy I'm supporting. He's a rock star."

Shauna White, a pre-school teacher from the town of Dublin, said she supported neither Obama nor Clinton in the primary. But she doesn't care for McCain, and had come to see if she might be persuaded to support the Illinois senator.

"I'm not 100 percent on board at this time, even though I have very strong reservations about McCain," she said.

The crowd responded enthusiastically to both candidates, who stood next to each other on stage in matching outfits - Clinton in a baby-blue suit and Obama in a similarly-hued tie. Clinton spoke first, urging anyone who had come to the rally and was considering not backing Obama to reconsider.

"We are one party, we are one America and we are not going to rest until we take back our country and put it once again on the path to peace, prosperity and progress in the 21st century,'' said Clinton.

She also joked about her sometimes contentious battle with Obama.

"I was proud that we had a spirited dialogue," the former first lady said, to laughter to the crowd. "That was the nicest way I could think of saying that."

At one point, an Obama chant rose up during Clinton's remarks; seemingly in response, a Hillary chant followed.

More Coverage From Unity, N.H.:
Obama, Clinton Seek Unity In New Hampshire
Horserace Blog: Two Clinton Voters On Why They're Not On Board With Obama

The presumptive nominee opened his remarks with kind words for his formal rival, at one point simply noting, "she rocks."

"We need them, we need them badly," Obama said in reference to Clinton and her husband, adding, "that's how we're going to bring about unity in the Democratic Party."

Obama strategist David Axelrod said immediately after the rally that it might take time to bring some Clinton supporters over to his side.

"This has been a titanic struggle for the nomination, there is great passions here evoked on all sides," he said. "It's going to take some time, and some people won't be able to get passed it. I think most will."

Thomas, the Clinton supporter who said she would not support Obama, said she might reconsider if Clinton were added to the ticket.

"That's the only way that I would definitely say that I might vote for him," she said.

Peggy Belmonte stood in the back of the crowd holding a homemade sign reading "Obama/Hillary, Perfect Pair." She shouted "Hillary V.P.!" during Clinton's speech. But Belmonte said she would support Obama even if he didn't put Clinton on the ticket.

And that response may sum up the attitude of most of the former Clinton voters who showed up in Unity, many of whom expressed a strong desire to move on from eight years of Republican leadership.

"I knew I liked Obama enough to go with him," said Bramblett, who acknowledged that she did have at least a moment of hesitation when Obama became the presumptive nominee. "You just can't switch buttons that easily, right?"