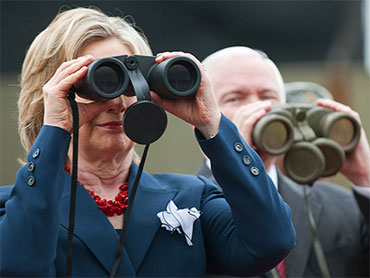 Secretary of State Hillary Rodham Clinton said Wednesday the U.S. would impose new sanctions on North Korea, the reclusive communist nation suspected of sinking its neighbor's warship and balking at international demands to reveal the details of its nuclear program.

Clinton said at a joint press conference in Seoul the sanctions are part of a series of measures designed to stop nuclear proliferation. She said the moves were meant to halt illicit activities that help fund the Pyongyang regime's atomic weapons program.

Standing earlier at the spot that divides North and South Korea, Clinton urged the North to turn away from the isolation that has left its people suffering.

Clinton and Defense Secretary Robert Gates paid a rare visit on a rainy day to the heavily fortified border dividing the two Koreas - a symbolic trip four months after the deadly sinking of the South Korean warship blamed on the North.

Forty-six South Korean sailors were killed when the Cheonan exploded in the waters near the Koreas' western maritime border. An international team of investigators pinned the blast on a torpedo fired from a North Korean submarine - the worst military attack on South Korea since the 1950-'53 Korean War.

Sixty years after the fighting began, the peninsula remains divided in a state of war because the conflict ended in a truce, not a peace treaty. Hundreds of thousands of troops stand ready on both sides of the 3-mile-deep demilitarized zone, making it one of the most heavily guarded borders in the world.

"Although it may be a thin line, these two places are worlds apart," Clinton said in a drizzling rain outside the Military Armistice Commission building, where officials from North Korea and the U.N. Command meet for talks.

Clinton praised longtime ally South Korea for making "extraordinary progress" in the years since the Korean War, economically and politically. "By contrast, the North has not only stagnated in isolation, but the people of the North have suffered for so many years."

She thanked the troops - U.S., South Korean and from other U.N. nations - that guard the buffer zone that stretches from east to west and lies just 30 miles from the South Korean capital.

"We continue to send a message to the North: There is another way. There is a way that can benefit the people of the North," she said. "But until they change direction, the United States stands firmly on behalf of the people and government of the Republic of Korea, where we provide a stalwart defense along with our allies and partners."

South Korea, formally known as the Republic of Korea, has risen from the ashes of the war to become the world's 15th-largest economy. North Korea's economy, in contrast, has faltered for decades, with millions depending on food handouts.

"It is stunning how little has changed up there and yet how much South Korea continues to grow and prosper," Gates said after looking into North Korea from an observation point. "The North, by contrast, stagnates in isolation and deprivation. And, as we saw with the sinking of the Cheonan, it continues its history of unpredictable and, at times, provocative behavior."

Clinton and Gates later headed to the War Memorial to lay wreaths for the sailors killed in the sinking of the Cheonan and to commemorate the Korean War. They were to sit down for security talks with their South Korean defense and diplomatic counterparts in the afternoon.

U.S. officials said they expect an announcement Wednesday of "country-specific sanctions" against North Korea. One official described the sanctions as "strong," and said they would target banks and other institutions but declined to be more specific.

North Korea has denied any role in the sinking of the Cheonan and has warned that any punishment would trigger war.

The U.N. Security Council earlier this month approved a statement condemning the sinking but stopped short of directly blaming Pyongyang for the attack. But U.S. and South Korean officials say the aggression must not go unpunished.

Gates, arriving a day earlier than Clinton, announced Tuesday with his South Korean counterpart Kim Tae-young that the U.S. and South Korea would push ahead with four days of joint military exercises starting Sunday.

The USS George Washington aircraft carrier arrived in the southern port of Busan on Wednesday to take part in the exercises.

The U.S. stations 28,500 soldiers in South Korea, a legacy of the Korean War, and routinely holds joint military drills that raise the ire of North Korean officials, who cite the threat as a main reason for building up its nuclear program.

At the height of the Cold War, the two Koreas occasionally exchanged gunfire along the DMZ. In 1976, two U.S. Army officers were hacked to death by North Korean soldiers.

Former President George W. Bush, during a 2002 visit to the DMZ, urged the "despotic regime" in the North to unite with the free South, saying: "No nation should be a prison for its own people."

His predecessor, Bill Clinton, reportedly described it as "the scariest place on Earth" after touring the no man's land in 1993.

As Clinton and Gates arrived at the "truce village," Panmunjom, on Wednesday, curious North Korean soldiers watched from just several feet away while about 10 people on the North Korean side of the DMZ observed the delegation through binoculars.

Tourists can visit parts of the DMZ on guided tours from both sides of the border.